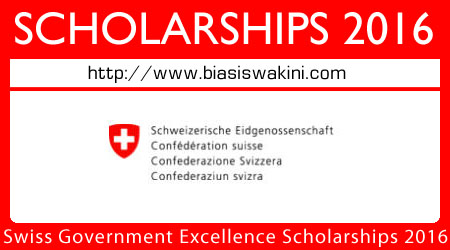 Each year the Swiss Confederation awards Government Excellence Scholarships 2016 to promote international exchange and research cooperation between Switzerland and over 180 other countries. Recipients are selected by the awarding body, the Federal Commission for Scholarships for Foreign Students (FCS).
The Swiss Government Excellence Scholarships are aimed at young researchers from abroad who have completed a master’s degree or PhD and at foreign artists holding a bachelor’s degree.

The research scholarship is available to post-graduate researchers in any discipline (who hold a master’s degree as a minimum) who are planning to come to Switzerland to pursue research or further studies at doctoral or post-doctoral level.
Research scholarships are awarded for research or study at all Swiss cantonal universities, universities of applied sciences and the two federal institutes of technology. Only candidates nominated by an academic mentor at one of these higher education institutions will be considered.

Art scholarships are open to art students wishing to pursue an initial master’s degree in Switzerland. Art scholarships are awarded for study at any Swiss conservatory or university of the arts. Only those who have already been awarded a place to study may apply. This scholarship is available to students from a limited number of countries only.