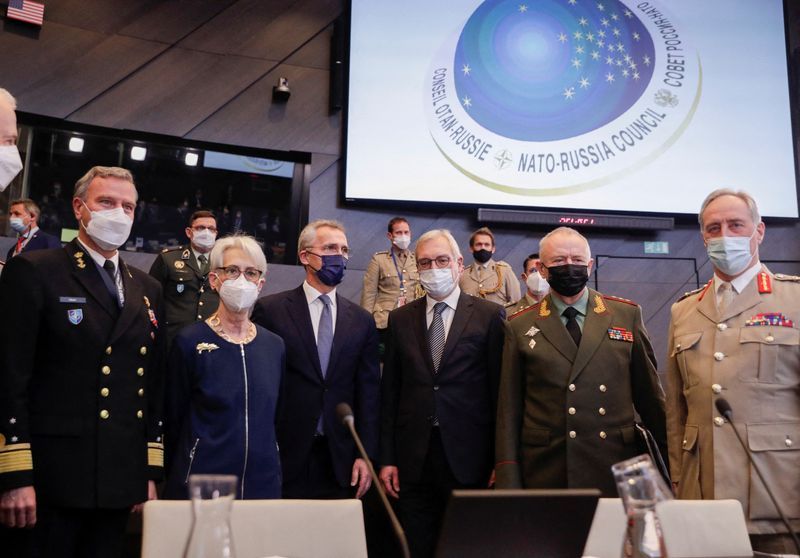 VIENNA/MOSCOW (Reuters) – Russia said on Thursday it was hitting a dead end in its efforts to persuade the West to bar Ukraine from joining NATO and roll back decades of alliance expansion in Europe, and threatened unspecified consequences in response.

Deputy Foreign Minister Sergei Ryabkov was quoted by TASS news agency as saying Russian military specialists were providing options to President Vladimir Putin in case the situation around Ukraine worsens, but diplomacy must be given a chance.

He said talks with the United States in Geneva on Monday and with NATO in Brussels on Wednesday had shown there was a “dead end or difference of approaches”, and he saw no reason to sit down again in the coming days to re-start the same discussions.

Russia has forced the United States and its allies to the negotiating table by assembling around 100,000 troops near the border with Ukraine, while denying it plans to invade.

It gave a stark assessment of this week’s diplomacy before it had even finished, as talks were under way in Vienna on Thursday at the 57-nation Organization for Security and Cooperation in Europe. (OSCE).

“If we don’t hear constructive response to our proposals within reasonable timeframe & aggressive behaviour towards (Russia) continues, we’ll have to take necessary measures to ensure strategic balance and eliminate unacceptable threats to our national security,” the Russian mission to the OSCE said on Twitter, quoting its Ambassador Alexander Lukashevich.

Poland’s foreign minister said in Vienna that Europe was closer to war than any time in the last 30 years and the U.S. envoy said the West should not give in to blackmail.

Russia says that after decades of NATO expansion it is determined to draw red lines and stop the alliance from admitting Ukraine as a member or basing missiles there.

The United States says Russian demands to veto Ukrainian membership and halt NATO military activity in eastern Europe are non-starters, but it is willing to talk to Moscow about arms control, missile deployments and confidence-building measures.

Ryabkov said the United States and its NATO allies were “not ready to meet our key requirements” and were only ready to discuss issues of secondary importance to Moscow.

Kremlin spokesman Dmitry Peskov told reporters that this week’s talks had yielded some “positive nuances” but this was not enough. He said disagreement remained on fundamental questions.

He criticised a sanctions bill unveiled by U.S. Senate Democrats on Wednesday that would target top Russian government and military officials, including President Vladimir Putin, as well as key banking institutions, if Russia attacks Ukraine.

Peskov said sanctioning Putin would be tantamount to severing relations.

“We view the appearance of such documents and statements extremely negatively against the background of an ongoing series of negotiations, albeit unsuccessful ones,” he said.

At the OSCE talks in Vienna, Polish Foreign Minister Zbigniew Rau called for a peaceful resolution over Ukraine.

“It seems that the risk of war in the OSCE area is now greater than ever before in the last 30 years,” Rau said in a speech, without naming Russia.

U.S. ambassador Michael Carpenter told the OSCE meeting: “As we prepare for an open dialogue on how to strengthen security for the benefit of all, we must decisively reject blackmail and never allow aggression and threats to be rewarded.”

Russia has said it will decide on its next moves after this week’s talks. It has threatened unspecified “military -technical measures” if its demands are rejected.

U.S. Deputy Secretary of State Wendy Sherman said on Wednesday that if Russia walked away, it would show it was never serious about diplomacy in the first place.

The United States has largely settled on the options for sanctions against Russia should it invade Ukraine and will be prepared to impose them as soon as any tanks roll, senior Biden administration officials said on Wednesday.