Sitting on the porch of her house in the southern tip of Penang island, a young girl raises her hand to drop well-worn marbles into the wells of a congkak set.

She’s surrounded by a small group of her peers and after a short while, her grandfather can be seen poking his head out to check on the group.

Such scenes are still found in Penang but you have to know where to look and those places are often far off from the buzz of the industries, the hustle of shopping malls and even away from the hum of revived energy in the state’s historic capital of George Town.

Half a century ago, however, such was hardly the case.

Devoid of electronic distractions and tuition-filled schedules, a variety of outdoor games flourished and were relished by the young.

Sitting on the porch of her house in the southern tip of Penang island, a young girl raises her hand to drop well-worn marbles into the wells of a congkak set.

She’s surrounded by a small group of her peers and after a short while, her grandfather can be seen poking his head out to check on the group.

Such scenes are still found in Penang but you have to know where to look and those places are often far off from the buzz of the industries, the hustle of shopping malls and even away from the hum of revived energy in the state’s historic capital of George Town.

Half a century ago, however, such was hardly the case.

Devoid of electronic distractions and tuition-filled schedules, a variety of outdoor games flourished and were relished by the young.

“If you lived at Weld Quay on the water, you would play games that involved the sea. In seasons where the wind was high, people would fly layang-layang (kites) and during the rainy months, indoor games like guli (marbles) and batu seremban (five stones) were more popular,” she says.

The spirit of competition was also high, whether it was coating one’s kite strings with glass powder to ‘cut’ the leash of another flyer or screaming frantic instructions to slower teammates in a game of kali toi.

Kuah notes that some games played during the time also revolved around festivals.

“One example is climbing a greased pole, which was a game played by the Indian community.

Overall, we see that games of that time were simple; they utilised things they could find, had specific rules and corresponded with suitable weather at different times of the year,” she adds. When was the last time you tried your hand at a game of congkak? Photo: Filepic

“We interviewed people all the way up to those in their 70s to tap into their collective memory of what was played long ago.

“From what we gathered, games were played everywhere: in school, on the street, in the compounds of the kongsi, even, later on, on the top floor of blocks of flats,” she says.

In an ode to the games of the past, Kuah co-curated the “Mai Main” streetfest on the streets of George Town which beckoned young and old to come and try their hand in 23 traditional games.

Guided by beautifully-illustrated game cards which explained the basics of the games, children – young in age and at heart – threw themselves into bouts of baling selipar (slipper throwing), nondi (hopscotch), tudung tin (bottlecaps), gasing (tops) and animal chess, to name but a few games.

“What we found was that for people in their 30s or younger, some had never played many of the games.

“Those who grew up in rural areas did play some of the games but this really wasn’t the case for those living in condominiums. Young kids who attended the festival, as well, were not familiar with the games,” says Kuah.

Though many traditional games have faded into obscurity over the decades, Penang is one place that is working hard to preserve and reintroduce them.

Arts-ED, a community-based cultural education organisation, is one example having produced research for Unesco on traditional children’s games played in the state.

Aside from that, grassroot programmes like “Wa Wa Warisan” in 2019, involving 120 students from seven primary schools in Penang through a four-session engagement process, taught children the old games and encouraged them to innovate games for themselves.

“Arts-ED has been using games in cultural education and to promote inter-generational and inter-cultural exchanges.

“We also want to make it relevant to the young people today as culture changes according to time,” says Chen Yoke Pin, Arts-Ed senior manager.

Through the digital divide

Technology has been the biggest driver of change in the last 50 years and children’s environments and games bear little resemblance to that of their parents and grandparents.

Communal games, which thrived on the ability of children to gather easily, have largely disappeared, especially in urban areas.

In cities and suburbs where gates and guards are common, children now gather infrequently, making the games they play more individualistic – a trait that digital entertainment richly caters for. “Children aren’t allowed to run and play in school now before the bell rings or at recess. If they get to school early, there is an area designated where they assemble for morning reading and worksheets,” laments a parent in Bayan Lepas.

Games played at school are now mostly limited to those that can be played at a table or on paper, so the children don’t make that much noise.

Cycling, rope jumping, roller skating and badminton remain popular when children do get together, along with variations of cops and robbers and hide-and-seek which dictate simple rules.

One notable game which has gained traction in recent years is Beyblade, a modern version of gasing or top spinning.

No rope winding is required with these plastic tops that are loaded into a launcher and unleashed with the pull of a lever.

First released in Japan, it was picked up by toy conglomerate Hasbro for international distribution in the early 2000s and has even been the featured toy accompanying fast food children’s meals here in the last few years.

In recent years, there has been encouraging signs in that local tabletop games can thrive.

Kaki Lima is one such example, produced by Penang-based media artist and filmmaker Goh Choon Ean.

Released in mid-2019, the strategy game navigates players through George Town’s five-foot ways with tasks to complete and points to win.

With players taking control of everyday characters like a tourist, a secondary school boy, a labourer or an elderly man sporting a walking stick, Kaki Lima also involves picking up quest exploration cards while you make your way around the historic state capital. 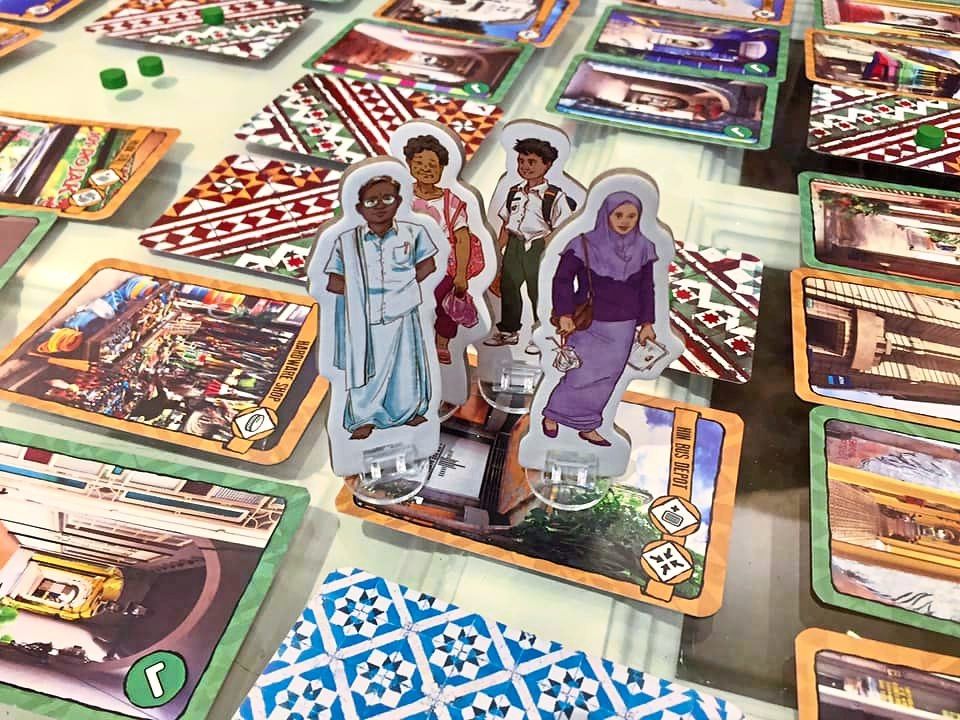 “I have loved board games all my life and Kaki Lima is the first game I have marketed. The team actually did the entire back-end production, quality assurance and packing ourselves, which we probably won’t do the next time around!” says Goh candidly, adding that there are 100 cards in each box and many other different components including tokens and paper clips.

Through LUMA, an arts and culture support organisation that Goh heads, monthly tabletop game sessions were also held prior to the pandemic where anyone could come, pull up a chair and whip their opponent at a board game.

“We have about 80 board games on the shelves but people are welcome to bring their own as well. We started GameGeeks in 2016 on one day a month and that eventually built up to a Friday-to-Sunday weekend once a month where people could come and play free of charge,” says Goh, who adds that sadly, the schedule of the gaming weekends has been severely disrupted by the pandemic.

On the future, Goh is looking at creating a new game based on the local wet market.

As the themes of history and culture run through Kaki Lima, this new game looks to follow a similar educational theme with players getting an insight into how different parts of a market operate.

“I’m thinking of calling it Bos Bansan, the latter word meaning ‘market’ in Hokkien. It will involve the value chain of a market; the journey from wholesaler to stall. Players will be able to negotiate for the best prices of raw goods and there will be local Penang dishes that they can sell for income,” says Goh.

Little money is to be made from the creation of local board games (Kaki Lima broke even around the first anniversary of its release) but to creators like Goh and similar minds who connect and support each other through the Tabletop Game Designers of Malaysia social media group, profit is secondary.

“In general, board games bring out a different sense of community, communication and interaction. I think the best part is when kids and parents put down their handphones and start playing together. That’s when you see the barriers break down,” she says.