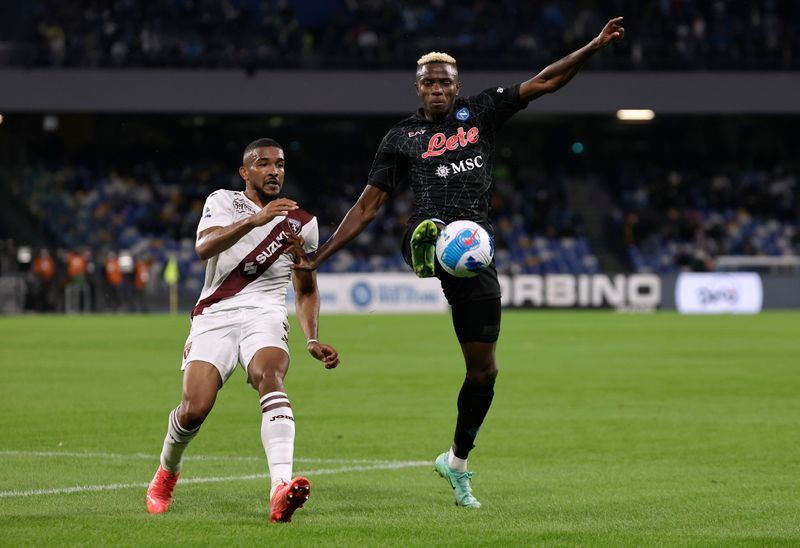 (Reuters) – Victor Osimhen scored an 81st-minute winner as Napoli beat Torino 1-0 on Sunday to return to the top of the Serie A table and record their eighth win in eight league games.

Luciano Spalletti’s side are top with 24 points, two clear of second-placed AC Milan.

However, Napoli faced a stern test trying to break through 12th-placed Torino.

Napoli had a golden chance to take the lead after 27 minutes when Benjamin Kone brought down Giovanni Di Lorenzo in the box, but Lorenzo Insigne’s resulting penalty was tame and easily saved by Vanja Milinkovic-Savic.

It was the Italy winger’s third failed spot kick in five attempts this season, the worst record in Europe’s top-five leagues.

Di Lorenzo headed the hosts in front after the break but the goal was disallowed for offside, before Napoli winger Hirving Lozano’s shot struck the foot of the post and the lively Josip Brekalo forced a smart save from David Ospina for the visitors.

The Partenopei eventually found the breakthrough late on when an attempted clearance was deflected high into a busy box and Osimhen rose highest to head home his fifth league goal of the season.

Earlier on Sunday, Josip Ilicic scored twice and missed a penalty as Atalanta won 4-1 at midtable Empoli to move into sixth place, level on 14 points with fifth-placed Lazio.

Cagliari clinched their first win of the season as Joao Pedro netted a double in a 3-1 home win over Sampdoria, lifting the Sardinian side up to 18th place, level on six points with Sampdoria in 16th.

Ten-man Udinese came from behind to earn a point against fellow midtable side Bologna. After Roberto Pereyra was sent off shortly before the break to leave the hosts a man down, Musa Barrow put the visitors ahead in the 67th minute. Beto pulled the hosts level with seven minutes remaining.

Gianluca Scamacca scored twice in the opening 20 minutes for 14th-placed Sassuolo against his former club Genoa, but the Grifone fought back through Mattia Destro and Johan Vasquez to earn a 2-2 draw that leaves them 17th.

Malaysia, Indonesia agree on ‘One Maid, One Task’

Other Sports: No decision yet on Beijing Olympics, says UK PM’s spokesman