Brembo has unveiled a new intelligent braking system dubbed Sensify, which it says combines advanced software based on artificial intelligence with its well-known brake components. Expected to be on the market from 2024, the company says its new braking system offers significant advantages and can be used for a variety of vehicles (city cars to sports cars, commercial vehicles and even race cars), regardless if they feature electric or internal combustion powertrains.

The Sensify system allows for independent control of braking pressure applied to each wheel, with a hydraulic actuator on each wheel activated by an electronic control unit (ECU) that constantly monitors key parameters such as road surface friction, vehicle mass, weight distribution, vehicle speed and steering angle.

A pair of ECUs control the actuators, with one managing those at the front, while another handles the rear. The commands issued by the ECUs are separate from one another, but they are still linked for failsafe reasons. Brembo also noted that the actuators have double windings for safety reasons and the Sensify system has already secured type approval from relevant authorities in all markets. 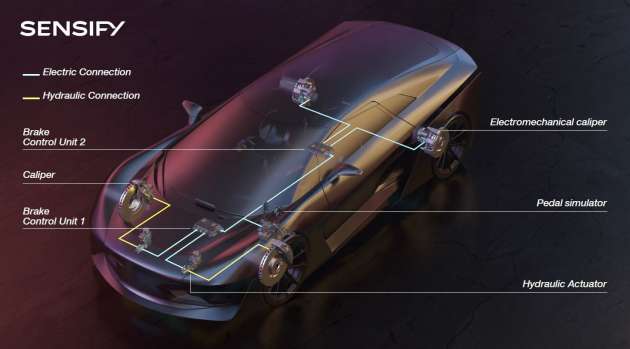 As for how the system operates, Autocar’s sampling of Sensify-equipped Tesla models revealed that when the ECU receives an input signal, it calculates the force required by each wheel within milliseconds before sending a command to each actuator.

This activates the connected caliper via hydraulics, which provides the required braking force in an otherwise fully electronic system. The Tesla test cars were equipped with conventional foot pedals for “feel” purposes, but the system can also be engaged using switches or buttons, as all that’s needed is to send an input to the ECU.

The system’s artificial intelligence acts to prevent brake lock-up, and anti-skid and traction control systems can be incorporated to provide a fully integrated suite of driver aids at little additional cost, Autocar noted. Unfortunately, the complexity of Sensify means retro-fitting is not possible on current cars.

As the activation of the actuators is done via ECUs, the Sensify system can be customised, which is done via a dedicated app, allowing users to change the “feel,” pedal travel and braking force. This ecosystem also collects and processes data to further improve the system through updates.

Advantages? Besides improved braking control and adaptability, Brembo says Sensify is more lightweight and compact in size than traditional braking systems. It also claims more sustainable braking, as the optimised braking action on each wheel combined with the absence of drag between pads and discs can reduce emissions.

That’s not all, as the system’s ability to adapt to vehicle weight makes it a good fit for commercial vehicles that have varying cargo loads. Motorcycles, which are more susceptible to weight and road surface changes, can also benefit from the system.

Share
Previous 售百亿资产为掏钱给政府，安华要求辩论国油课题
Next Rape is no joke: Malaysians urged to take a stand against rape culture