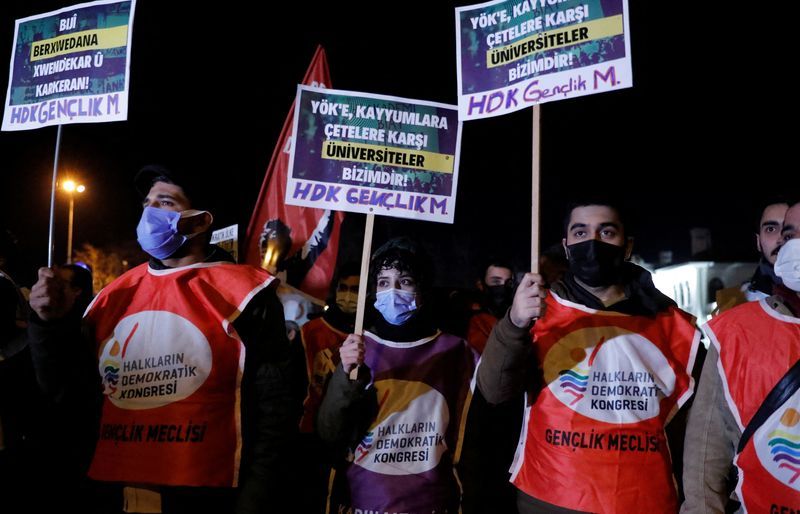 ISTANBUL (Reuters) – A Turkish court ruled on Friday to release two students from jail in the first hearing of a broader case over campus protests against the government’s appointment of a rector at Istanbul’s Bogazici University.

The protests at the prestigious Bogazici began one year ago after President Tayyip Erdogan appointed as rector Melih Bulu, an academic and former political candidate. He was later replaced by Naci Inci, one of his deputies, in August.

The protests briefly spread elsewhere in Istanbul and to other cities, and led to the brief detention of hundreds of people.

Fourteen students were detained in October for participating in the protests and two of them, Berke Gok and Perit Ozen, were jailed pending trial while the rest were released.

The students were charged with violating the law regarding demonstrations, preventing public officials from doing their duty and intercepting a vehicle among other crimes.

Ahead of the hearing students gathered in support of the defendants near Istanbul’s main courthouse holding signs demanding their freedom.

Burcin Sahan, a lawyer for the pair, said after the hearing that “judicial harrassment” against the students needed to end.

Sergey Lagodinksy, a member of the European Parliament, said before the ruling that the charges against the students should be dropped and called their detention “absolutely unjustified”.

“Expressing your opinion publically and peacefully is a fundamental right,” he said on Twitter.

Students and teachers at Bogazici protested regularly over the past year against what they say is government interference in academia. They clashed with police at times, prompting Erdogan to describe them as terrorists.

Faculty members, some of whom have gathered daily with their backs turned on the rector’s building, say the protests will continue until a rector is chosen by university members and academic freedoms were secured.

In a separate case, seven students are charged with inciting hatred for displaying an image that combined Islamic imagery with LGBT flags during the protests last year, which led Interior Minister Suleyman Soylu to label the students “LGBT deviants.”

Share
Previous Correct or Untrue: Can You End Up Being Simply Pals With Somebody You’ve Got Sex With?
Next 19 of the greatest activities to do almost Barksdale AFB (2021 release)