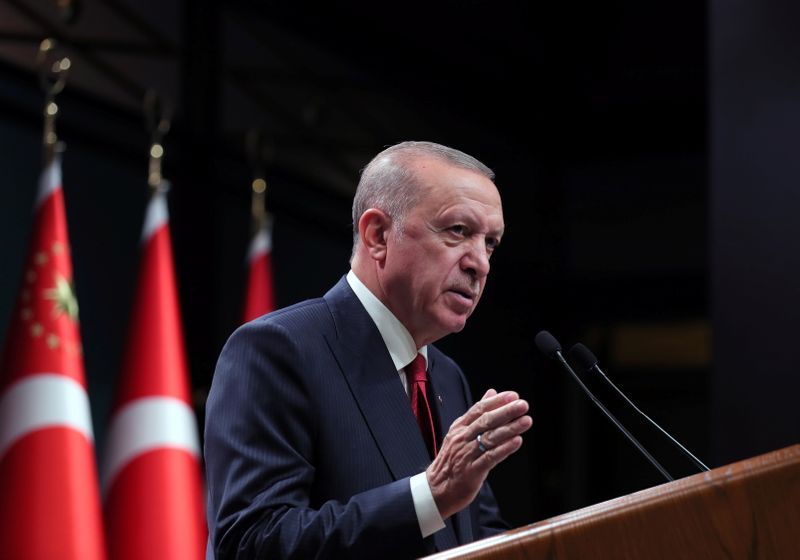 ISTANBUL (Reuters) – President Tayyip Erdogan slammed ambassadors of 10 countries, including the United States, Germany and France, over their call for philanthropist Osman Kavala’s release, saying Turkey should not be hosting them, in comments reported on Thursday.

The foreign ministry summoned the ambassadors on Tuesday for what it said was an “irresponsible” statement calling for a just and speedy resolution to Kavala’s case. He has been in prison since late 2017 without being convicted.

Kavala was acquitted last year of charges related to 2013 nationwide protests, but the ruling was overturned this year andcombined with charges in another case related to a coup attempt in 2016.

In a statement this week, the ambassadors called on Turkey to secure Kavala’s swift release.

“I told our foreign minister: We can’t have the luxury of hosting this lot in our country. Is it for you to give Turkey such a lesson? Who do you think you are?” Erdogan was quoted as telling reporters on his plane returning from a trip to Africa.

He rejected any suggestion that the Turkish judiciary was not independent. “Our judiciary is one of the nicest examples of independence,” Haberturk news website reported him as saying.

Rights groups say Kavala’s case is emblematic of a crackdown on dissent under Erdogan.

The European Court of Human Rights (ECHR) called forKavala’s immediate release in late 2019 over a lack ofreasonable suspicion that he committed an offence, ruling thathis detention served to silence him.

The other parties to the ambassadors’ statement were Canada, Denmark, the Netherlands, Norway, Sweden, Finland and New Zealand.

The next hearing in the case against Kavala, who has deniedall charges, and others will be held on Nov. 26.