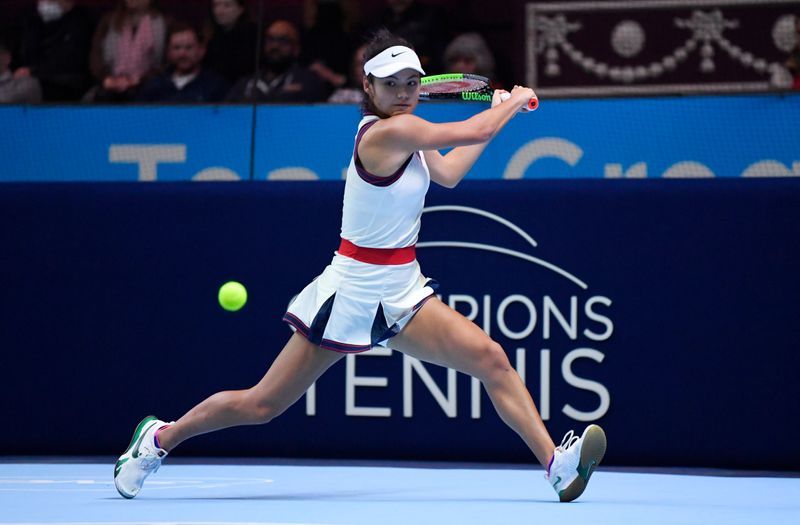 On Sunday, 79 days since an extraordinary run in New York culminated in victory over Canada’s Leylah Fernandez and being crowned Britain’s new tennis queen, the 19-year-old enjoyed a belated homecoming at the iconic Victorian concert hall.

The stakes were not as high for her exhibition match against Romanian Elena-Gabriela Ruse as when, as a qualifier ranked 150th in the world, she became Britain’s first female Grand Slam champion for 44 years in September.

But, with respect to the former big names who have been gracing this week’s Champions Tennis event, the packed lunchtime crowd had only come to see Raducanu, who has risen from obscurity to become one of the world’s most marketable athletes.

It was her first match on home soil since July when her dream Wimbledon debut came to an end in the fourth round after she retired with breathing difficulties against experienced Australian Ajla Tomljanovic.

There was no such drama this time in a light-hearted hit-around with her friend and regular practise partner Ruse, ranked 85th in the world. The pair delighted spectators in the 150-year-old venue with some engaging rallies and jokes, with one young fan yelling “Emma will you marry me” in the third game.

Later Ruse handed her racket to a ballboy who rallied with Raducanu and even managed to break serve after some nifty network.

The serious business starts again now for Raducanu and new coach Torben Beltz as she prepares for the looming Australian where she will have a lot to live up to.

Share
Previous 政府推出团结行动蓝图，首相强调非流于空谈
Next PM: Be proud of Bahasa Melayu

The Papers: 'Cost of living delayed by Downing Street turmoil'