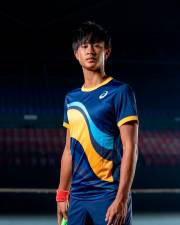 CHRISTIAN DIDIER has made quite an name for himself as a young professional tennis player. Ever since his career started in 2017, the 20-year-old has been making headlines for his impressive string of achievements.

The ultimate highlight of his career thus far is being the first Malaysian to play at the Grand Slam.

Christian’s passion for the sport blossomed at the tender age of 11.

“I used to be a soccer player when I was younger. I played soccer for my school, the state and at one point for the Malaysian Under-11 [team].

“But one day, my dad suggested I play tennis and I immediately fell in love with the sport,” said the Sabah native excitedly in our recent conversation.

Unfortunately, the past two years have not been productive for him given the current circumstances.

“This is the first time in my career that I have been staying in one place for two years. I usually travel every two weeks. So, I have been mentally training myself to focus on the future – what my future is going to be like. It has been tough but I think it has also been two years of maturing due to the pandemic.”

What is the highlight in your career thus far?

“I think my highlight is when, at 18, I became the first Malaysian to make it to the Grand Slam. The journey through that process of competing in the Grand Slam in Australia Open and being around well-known players like Novak Djokovic in the same tournament – yeah, it is definitely my biggest highlight.”

Have you ever had any terrible tennis-related injuries?

“Fortunately, I do not get injured a lot. Even if I get injured, I would quickly recover because I am the type of person to know when to stop and when not to. So, I think it is not really physical injuries for me, but more mental.

“Throughout my career, I have been fortunate to experience success from very early on. But it can be difficult at times to get back up when I experience failure.”

How do you keep yourself inspired then?

“I believe if you have a dream, you just need to chase it. That is one of the most important things I’ve told myself. Do not try to chase fame and money, but chase a goal; a dream that you look forward to. [And] understand why you want to achieve that.

“I want to become successful because I hope to share my dreams with younger kids who don’t get the chance to believe [in their dreams]. So, this is my dream: to share the message that no matter where you come from, you can always achieve your dream.

“All you need is a bit of courage and to know where you are going. And it does not matter how old you are. And by applying this, I think you will be able to achieve your dream.”

Who are some of your role models?

“I look up to tennis players like Roger Federer because even at the age of 38, he is still playing and enjoying tennis.

“As for the people in my life, I think it would be my coach whom I met two years ago. He is one of my biggest role models.

“I look up to him so much because of the values he shared with me about life. He is the one who taught me that it is not important to chase money.

“So, he is someone I definitely look up to, and I intend to make him proud one day by being the first in the nation to play in the big leagues again.”

Where do you like to see yourself in five years?

“I’d like to see myself in a lot of places but to be specific, I would like to be in the next Olympics. I will be moving to Australia by January to prepare for that, to chase that bigger dream with the help of world champions.

“So yeah, I would want to compete in the Olympics, be in the top 100, make history again in the men’s circuit, play in the Grand Slam again and play against Novak Djokovic before he retires.”

Dear Thelma: My wife is unwilling to leave the house for holidays

Is it healthy for kids to be vegetarians?

Dog Talk: Woof, are you there?

Hope, healing and resilience as captured by Malaysian artists and photographers