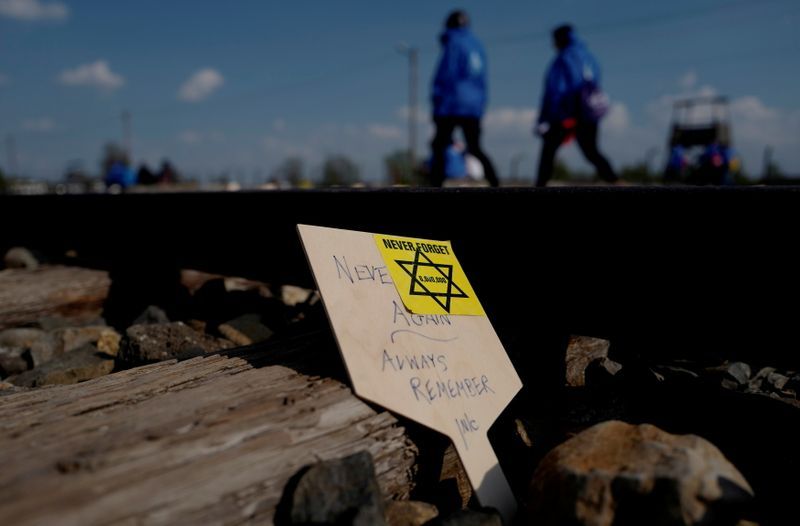 LISBON (Reuters) – Portugal paid tribute on Tuesday to former diplomat Aristides de Sousa Mendes, who defied the Salazar dictatorship to issue visas to tens of thousands of Jews and other refugees, saving them from the horrors of Nazi concentration camps.

To honour him, a stone plaque was placed on the walls of the National Pantheon in Lisbon, which houses the tombs of major personalities from well-known fado singer Amalia Rodrigues to footballer Eusebio.

In 1940, as Portuguese consul in the French city of Bordeaux, Sousa Mendes defied orders from dictator Antonio Oliveira Salazar and handed out visas to Jews and others escaping the Nazis.

At the time, Portuguese diplomats had to request permission before granting the visas to Jews and other categories of applicants but Sousa Mendes decided to do it without asking, at great personal risk.

“Persecution did not end with World War II… unfortunately history showed us that what Aristides de Sousa Mendes was confronted with is still a reality today,” Prime Minister Antonio Costa said after the well-attended ceremony.

“He is an inspiration for us to keep the same values alive: protecting the dignity of human beings, of lives, of those who seek protection,” Costa added.

The visa recipients were able to cross into Portugal and from there travel freely to other countries, such as the United States.

When Salazar, who ruled Portugal with an iron fist for more than three decades, found out about Sousa Mendes’ disobedience, he ordered him back to Lisbon and he was fired from the diplomatic service.

“Today … we are able to see the importance of what he did for humanity,” researcher Margarida Ramalho said at the ceremony. “He was able to put himself in someone else’s shoes.”

Sousa Mendes and his family struggled to make ends meet after he was forced out of his job and he died in poverty in 1954. He was only recognised for his life-saving acts after his death.

Share
Previous Germany’s RWE expects to spend $21 billion in Britain by 2030
Next Covid-19: Number of cases spike in Sabah