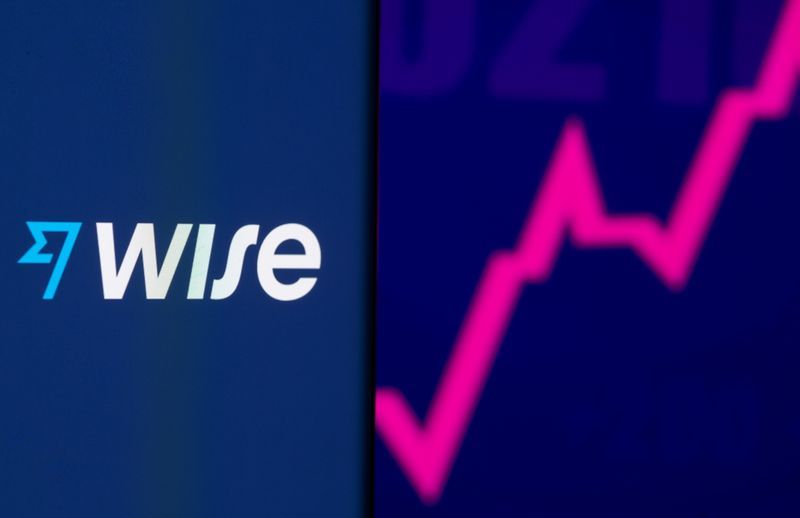 LONDON (Reuters) -Money transfer company Wise Plc said on Tuesday that its revenue was 132.8 million pounds ($182.97 million) in the second quarter, a rise of 25% from the same period last year.

Wise, which listed on the London Stock Market in July, said in a trading update that the growth was due to a rise in customer numbers attracted in part by lower prices. It said almost 4 million customers transferred 18 billion pounds ($24.8 billion) in the second quarter, up 36% from the previous year.

The company, which specialises in cross-border transfers and is one of Britain’s most well-known fintech “unicorns,” said it reduced costs for 1.7 million customers by 8 basis points from the same period last year, to an average of 0.62%.

That meant its “take rate” – the percentage of money being transferred over its platform that it books as revenue fell to 0.74% from 0.8% a year earlier.

Wise said it expects its take rate for the second half to be slightly lower than in the first half, but still anticipates revenue growth for the year to March 2022 to be in the low- to mid-20% range over the previous year.

Q&A-Why is Telecom Italia caught up in bid excitement?

M’sia to gain RM44bil in export revenue with RCEP

E-commerce: Would you pick slower delivery to cut your carbon footprint?

Cricket: Cricket-Paine to miss Ashes on ‘leave of absence’ from all cricket – Cricket Tasmania