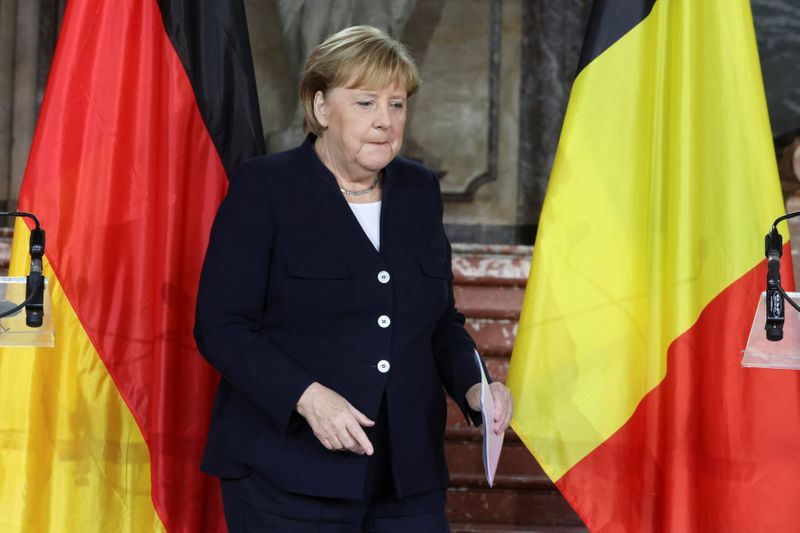 BRUSSELS (Reuters) -The European Union should resolve its differences by talking to each other rather than through court decisions, German Chancellor Angela Merkel said on Friday, responding to a question on the dispute with Poland over the rule of law.

“We are all member states of the European Union, which means we have the duty always to try to find compromise – without giving up our principles, obviously,” Merkel told reporters after meeting Belgian Prime Minister Alexander De Croo in Brussels.

Poland’s Constitutional Tribunal ruled last week that parts of EU law are incompatible with the country’s constitution, undermining the central tenet of the European Union and fueling talk that Poland could one day quit the 27-nation bloc.

Poland’s right-wing populist government has clashed regularly over issues ranging from LGBT rights to judicial independence with the European Commission, triggering a series of European Court of Justice cases.

“I think it is time to talk more in depth with the Polish government on how to overcome the problems,” Merkel said. “It is certainly right that, from time to time, cases have to be decided by the European Court of Justice.”

The chancellor, who will leave office once a new German coalition is formed, said she was concerned by the number of cases ending up at the EU’s top court.

De Croo said he was on the same page as Merkel

“This could become a big issue, but we could prevent it becoming a big issue if we engage … I think that just criticising and finger-pointing from the outside is not going to lead us anywhere,” he said.

Exclusive-Uber in talks with Mideast unit over outside investment – sources

Football: Mourinho’s latest outburst further proof all is not well at Roma

Sirim to develop Malaysia Railways Industrial Standard by May 2022