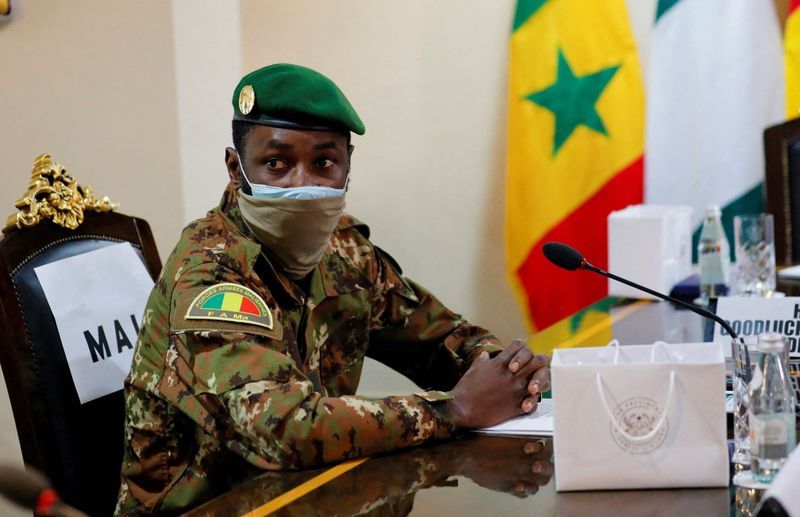 ACCRA (Reuters) – Mali’s interim authorities have slightly reduced the proposed length of a transition back to democracy following a 2020 military coup to four years from five years, the chairman of the West African bloc said on Sunday.

Leaders of the 15-member Economic Community of West African States (ECOWAS) are holding an extraordinary summit in Ghana’s capital Accra to discuss a proposal by transitional authorities in Mali to delay elections and a return constitutional rule.

It has made little progress since then, blaming disorganisation and a rash of Islamist violence. At the end of last year it informed ECOWAS of its plan to extend the transition to five years.

“Two days ago, the head of the Malian transition stated that the period had now been modified to four years,” said Ghanaian President Nana Akufo-Addo, acting ECOWAS chair.

Opening the summit, Akufo-Addo recalled the bloc’s resolve to implement additional sanctions if members were not satisfied with election progress. Last November, it imposed https://www.reuters.com/world/africa/west-african-bloc-imposes-sanctions-mali-leaders-over-stalled-vote-2021-11-07 travel bans and asset freezes on members of the transitional authority and their family members.

The bloc is expected to announce the result of talks, including any sanctions decision, immediately after the summit.

The organisation is under pressure to show it can protect democracy from a backslide to military rule after West and Central Africa saw four coups within 18 months.

The eight members of the West African monetary union (UEMOA) also held a Mali-focused summit in Accra on Sunday ahead of the ECOWAS meeting, raising expectations that more sweeping economic sanctions are again on the table.

Immediately after the 2020 takeover, ECOWAS closed its borders with Mali and halted financial flows – short-term sanctions that caused a sharp fall sharp slump in imports to the landlocked country.