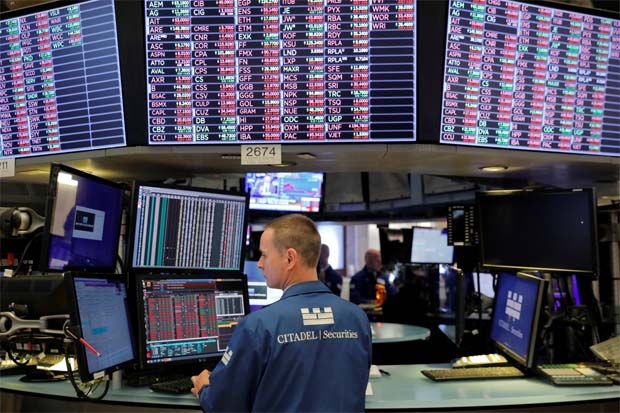 All three major U.S. indices ended the day lower, as investors processed whether strong consumer activity in the face of rising inflation could spur the Fed to ease back on stimulus faster than once thought.

The dollar eased from a fresh 16-month high, while the euro remained a little soft as investors weighed the odds of central bank tightening, which could slow growth, amid rising price pressures.

Concerns that the Fed may mishandle inflation are overblown as the U.S. central bank has clearly signaled how it will reduce its bond-buying without destabilizing the market, said David Bahnsen, chief investment officer at wealth manager The Bahnsen Group in Newport Beach, California.

“I simply do not believe the market ultimately expects a policy mistake that drives out some of the liquidity that has helped these markets,” Bahnsen said.

The dollar index, which tracks the greenback versus a basket of six currencies, fell 0.15% to 95.795.

Investors think higher inflation could encourage the Fed to accelerate the tapering of its asset purchase program.

The Fed began phasing out its bond-buying this month and expects to end purchases altogether by mid-2022.

Global equities have seen inflows of about $1 trillion in the past 51 weeks as positive news on coronavirus vaccines emerged, Goldman Sachs said in a note, adding this year has already seen four times the inflows of the previous best year.

Oil prices slumped after the Organization of Petroleum Exporting Countries and the International Energy Agency warned of impending oversupply and that rising COVID-19 cases in Europe increased the downside risks to demand recovery.

U.S. Treasuries rallied as a recent backup in yields reached levels that lured buyers back into the securities and after the Treasury sold 20-year bonds to tepid, but not terrible demand.

Benchmark 10-year yields reached 1.65%, the highest since Oct. 26, before retreating and falling back to 1.59%. They have increased from a low of 1.42% last week, before data showed that U.S. consumer prices posted their biggest gain in 31 years in October.= Reuters