Breaking News
Home / Entertainment / From The Archives: Wonder Woman in all her wondrous glory
Today (October 21) marks the 80th anniversary of DC Comics' biggest female superhero – Wonder Woman. In this article published in 2017 just after the Amazonian Princess made her big screen solo debut, Worlds Of Wonder columnist Kaleon Rahan explores the origins and development of comics' greatest female superhero.

This story originally appeared in StarLifestyle (then known as StarTwo) on 13 June 2017, and has been edited for brevity and clarity.

After Elektra, Catwoman and all those lacklustre femme fatale-centric comics-based movies, Wonder Woman finally hit one home for super heroines. Not only did the first Wonder Woman movie do justice to the character, it also provided a blueprint for future superheroine movies.

From The Archives: Wonder Woman in all her wondrous glory

This story originally appeared in StarLifestyle (then known as StarTwo) on 13 June 2017, and has been edited for brevity and clarity.

After Elektra, Catwoman and all those lacklustre femme fatale-centric comics-based movies, Wonder Woman finally hit one home for super heroines. Not only did the first Wonder Woman movie do justice to the character, it also provided a blueprint for future superheroine movies.

Wonder Woman has been an almost constant mainstay in the DC Comics universe, and is considered one of the publisher’s three core “Trinity” characters along with Batman and Superman, so it was great to see her finally getting her share of the limelight.

If, like us, you still can’t get enough of Wonder Woman after watching the movie, fret not – there are still plenty of her comics out there for you to savour.

Here, we recap the origins of Wonder Woman and what makes her, well, wonderful.

Rise of a princess 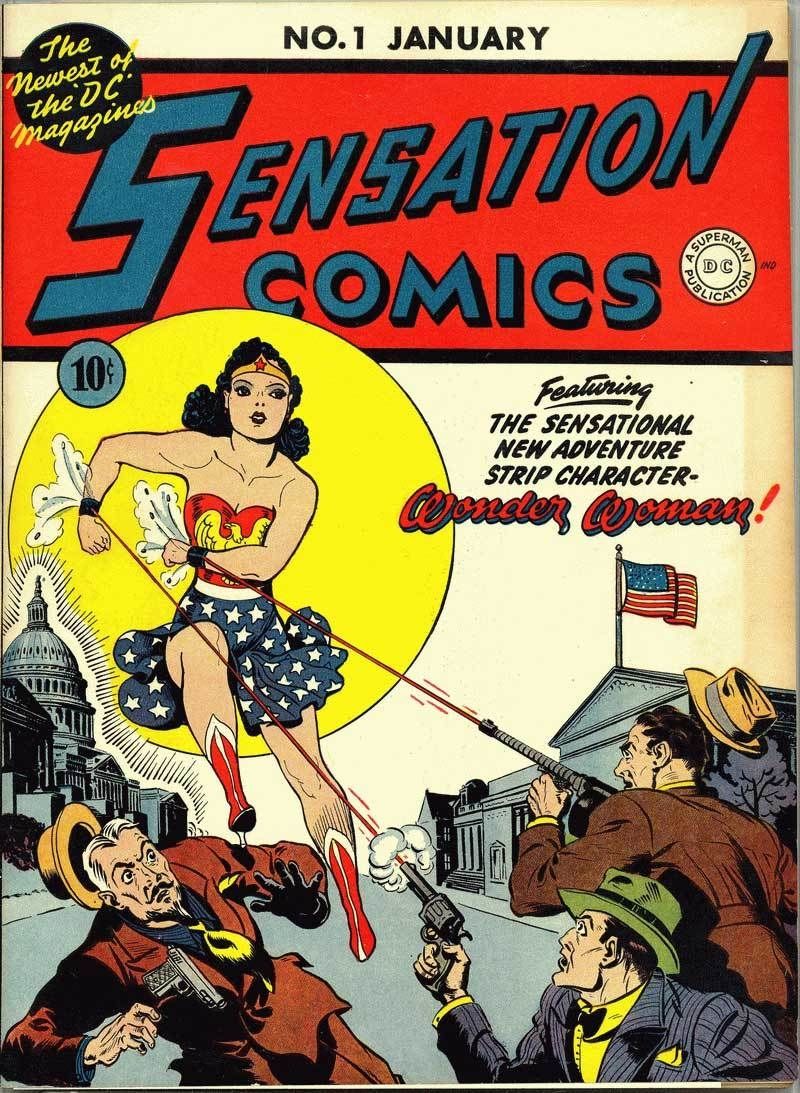 Wonder Woman’s original comics origins had her being sculpted from clay by her mother, Queen Hippolyta, but this has evolved throughout her existence.

When DC revamped its entire lineup with the New 52 initiative in 2011, Brian Azzarello and artist Cliff Chiang took the opportunity to revamp the character’s history, making her the natural-born daughter of Hippolyta and Zeus, and even turning her into the god of war!

Unfortunately, that history was thrown out the window with the Rebirth revamp – the Year One story gives her yet another origin story, with her receiving her powers from the Olympian gods.

Wonder Woman is the brainchild of William Moulton Marston, who also happens to be an American psychologist and the inventor of the polygraph lie-detector (which perfectly explains the Lasso of Truth!).

Drawing from several sources of inspiration, including his wife Elizabeth and cohabitant Olive Byrne, as well as birth control pioneer Margaret Sander, Marston came up with the idea of a superhero who would fight not with fists or weapons, but with love. His wife was the one who suggested that the hero should be a woman, and together with artist Harry G. Peter, Marston came up with Wonder Woman.

Fun fact: she was almost named “Suprema”, but editor Sheldon Mayer convinced Marston to rename her to Wonder Woman instead. 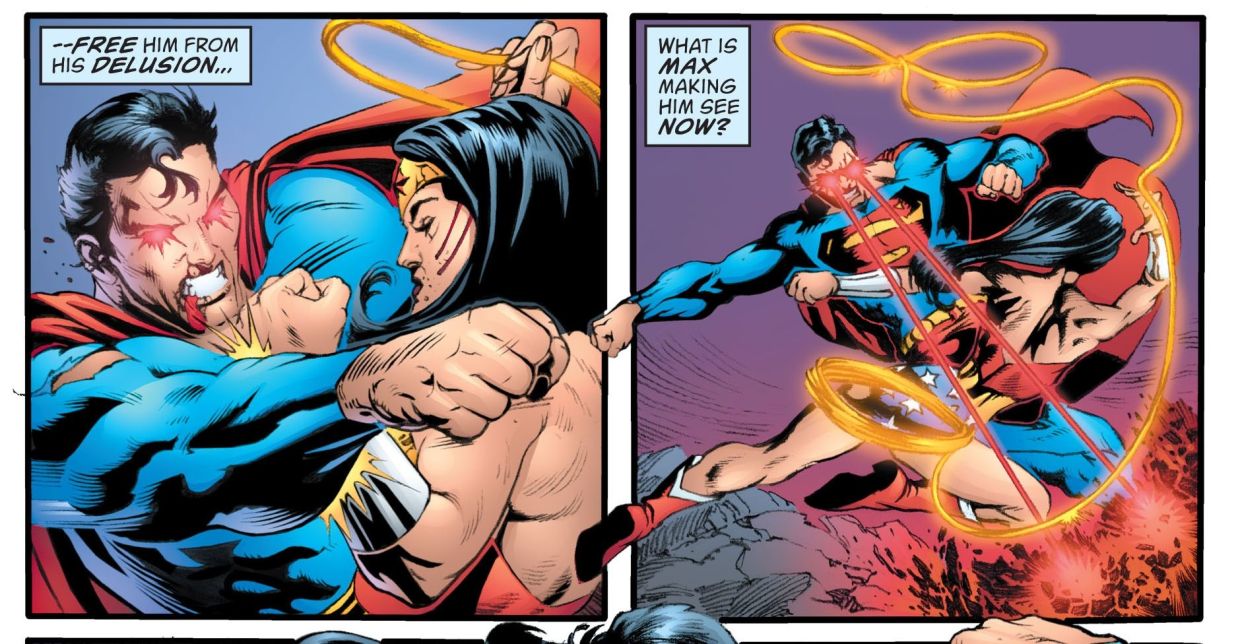 Wonder Woman is one of the few DC superheroes who can go toe to toe with Superman. Artwork: DC Comics Wonder Woman has grown to become one of DC Comics’ powerhouse superheroes. Artwork: DC ComicsWonder Woman made her debut in 1941’s All Star Comics #8, before finally making it on the cover of Sensation Comics #1 in 1942. Her initial adventures see her leaving Paradise Island for “Man’s World”, where she serves as an emissary of peace under the alias Diana Prince.

Her journey is not without hardship, as it is triggered by the unexpected arrival of US intelligence officer Steve Trevor, whose plane crashes on Paradise Island.

Had this been TV shows like Fantasy Island or Temptation Island, the outcome for Trevor would have been very different. However, Paradise Island is a No-Man zone and its resident Amazons thus have to select a champion to escort him back.

In Man’s World, Wonder Woman’s quest for good revolves around battling Nazi spies and crooked business owners, which was very much the circle of injustice during those times.

What’s in a name?

Coincidentally, the two are similar in appearance, and decide to switch identities for various personal reasons – Wonder Woman needs the identity to monitor a hospitalised Trevor, while the nurse needs some time-out to see her fiancé!

In terms of powers, Wonder Woman boasts super-strength and the ability to fly; but what sets her apart from other heroines with similar powers (Supergirl, Power Girl, etc) is the way she uses her powers in tandem with her Amazonian warrior training and her weapons.

Having been trained since birth in various forms of armed and unarmed combat as well as military strategy, Diana is no stranger to the art of war. Heck, Azzarello even made her the actual god of war at the end of his run, taking the place of Ares. Wonder Woman is probably the most warrior-like of the three core DC characters.

The warrior side of Wonder Woman is also apparent in the Mark Waid/Alex Ross classic graphic novel Kingdom Come, in which Diana dons her war armour and leads an army of superheroes against the escaped inmates of a superhuman prison. 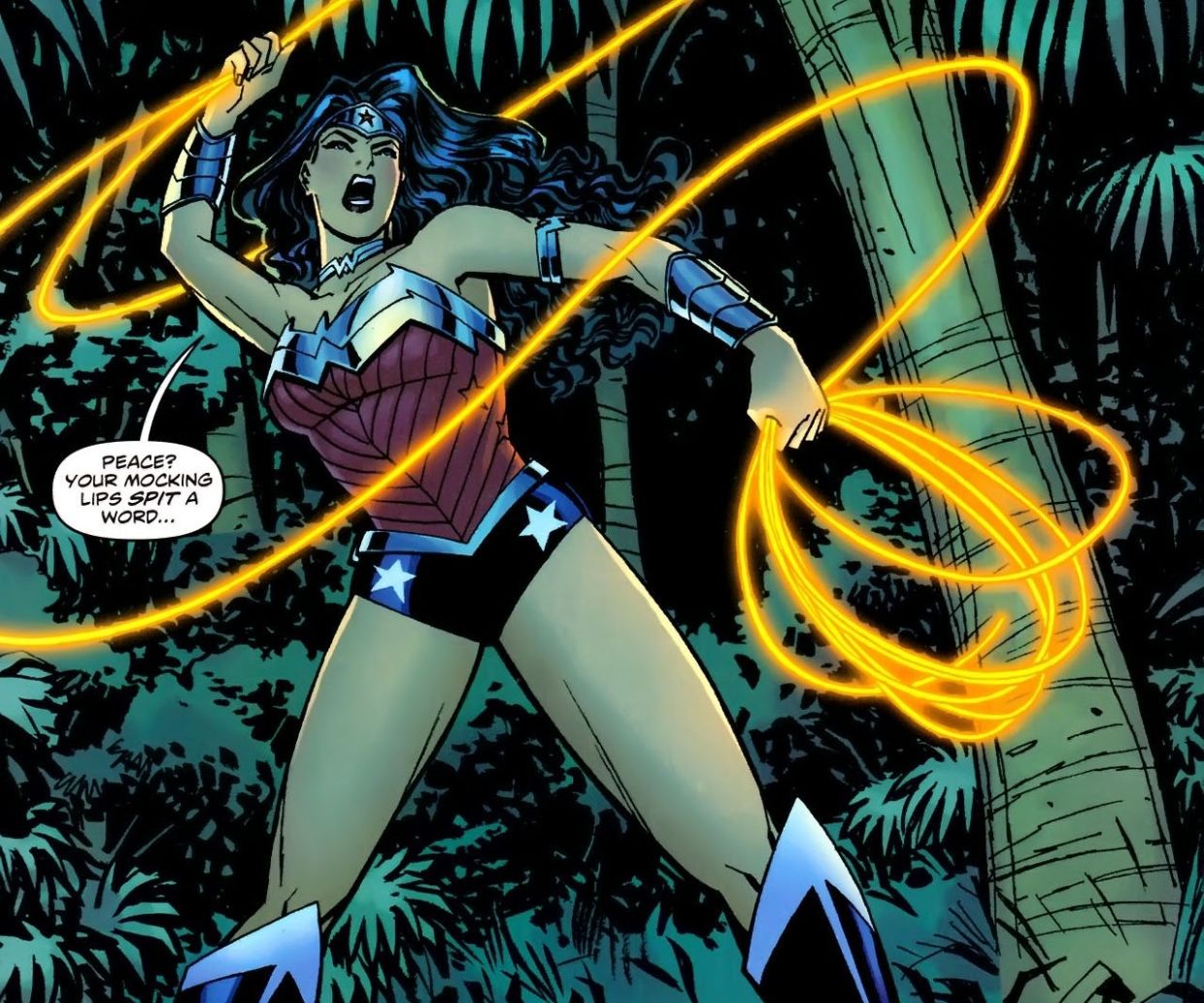 Wonder Woman’s golden Lasso Of Truth could coax the truth out of anyone caught in it.

Her main weapons of choice in the comics are her Lasso of Truth (which compels anyone held by it to tell the truth), her metal bracelets (which can deflect bullets), and her, er, tiara, which she can throw as a weapon.

She’s also pretty handy with other forms of weaponry, especially a sword and shield combo, and she even has a pair of golden guns at one point during the New 52 run.

The less said about her invisible jet the better, though. We still have no idea how that works.

After Marston’s death in 1947, the honour of scripting Wonder Woman went to Robert Kanigher, who took the opportunity to revamp her roots by boosting it with Hellenic mythological elements. 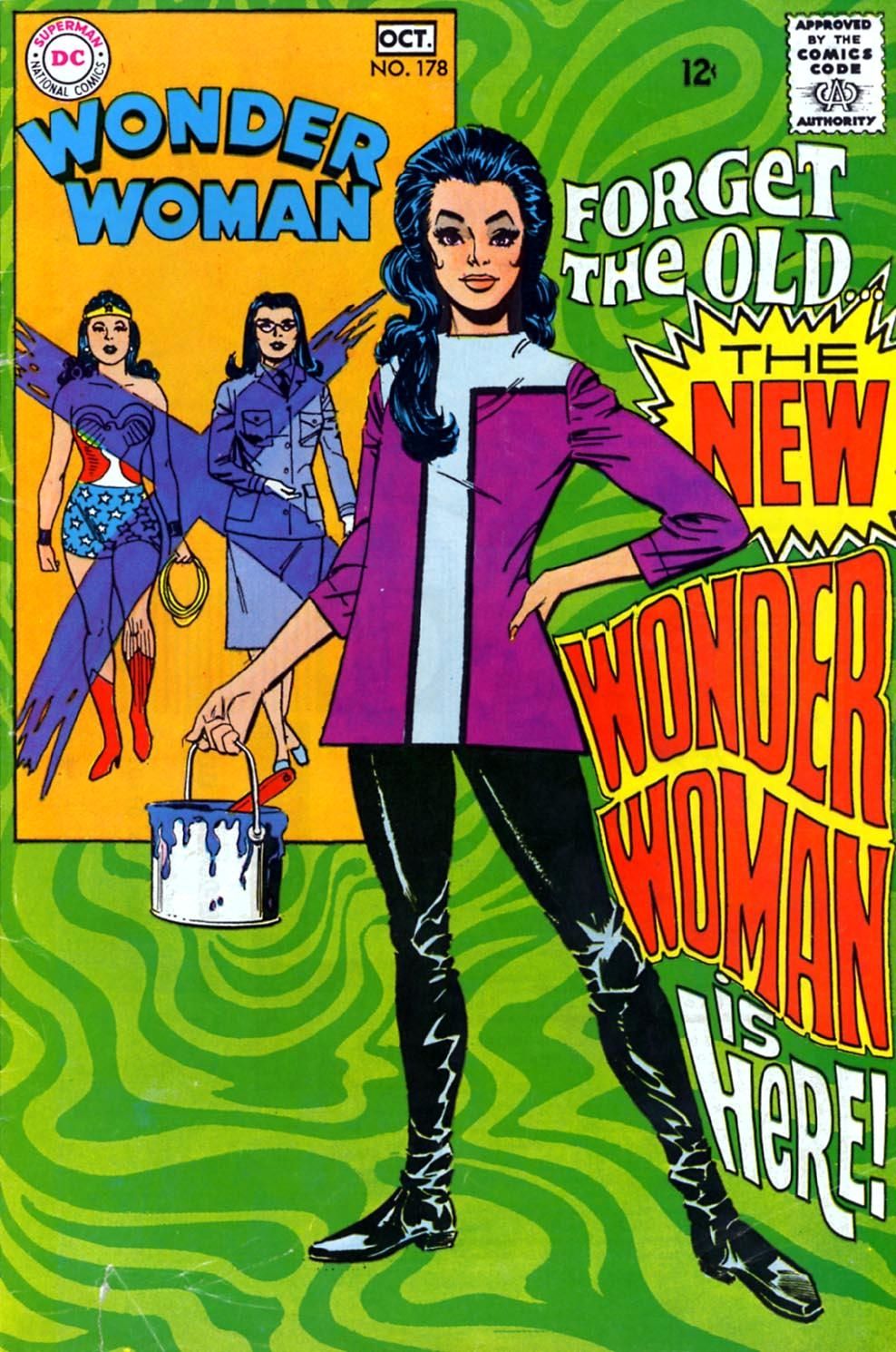 Stripped of her powers, Wonder Woman learns martial arts from a Chinese mentor named I Ching and opens a mod boutique. Artwork: DC ComicsInstead of just being Themyscira’s numero uno warrior princess, Diana is divinely infused with the blessings of a few deities, including Aphrodite (who blesses her with beauty), Athena (wisdom), Hercules (strength), and Hermes (speed).

While this divine combination would have made a Shazam showdown a top-biller, artist/writer Mike Sekowsky had other ideas when he took over the title with writer Denny O’Neil in 1969. He strips Wonder Woman of her powers after she chooses to remain in Man’s World over accompanying her fellow Amazons to another dimension.

Adjusting to her new “limitations”, Diana undergoes a 180-degree transformation – using the alias Diana Prince, she learns martial arts from a Chinese mentor named I Ching and opens a mod boutique!

Influenced heavily by Emma Peel of the British spy thriller The Avengers, Wonder Woman’s adventures in this period are a combination of espionage and mythology.

Ironically, it takes Wonder Woman’s “death” in 1985’s Crisis On Infinite Earths event to inject “life” into the character. Despite having been around for four decades, there had been few classic or memorable Wonder Woman stories.

Then along came a certain superstar comics creator named George Perez, who had previously turned the Teen Titans into an award-winning super-team, and had just revamped the entire DC Universe through Crisis On Infinite Earths. 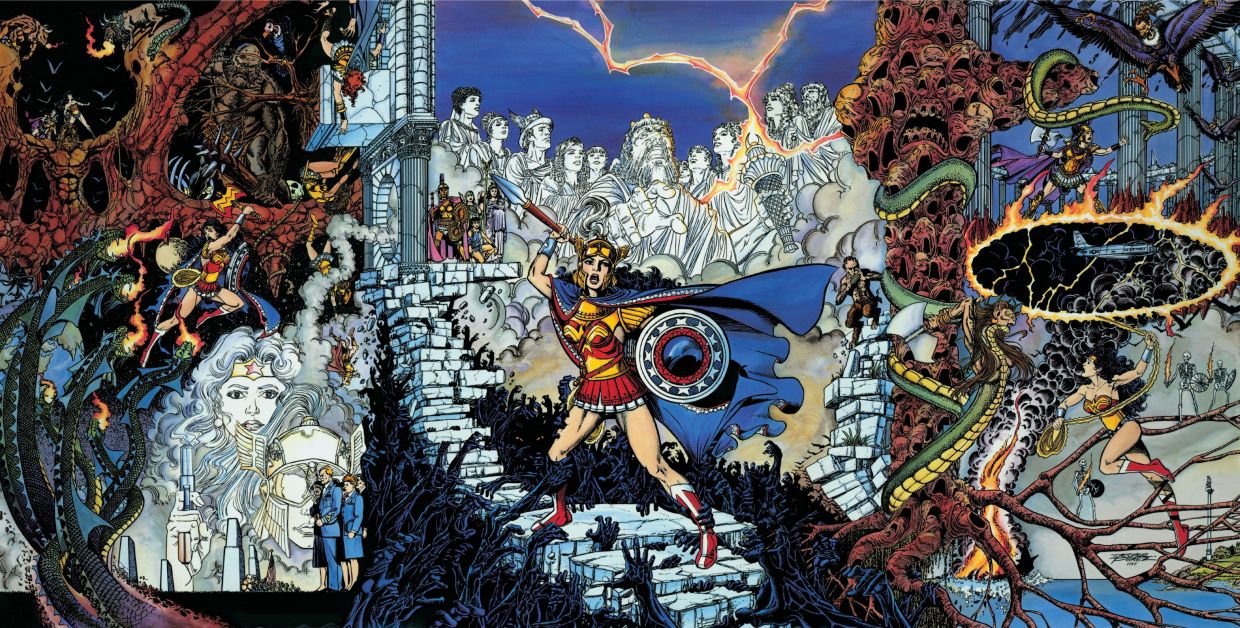 George Perez”s work on the character is considered one of the most defining Wonder Woman runs ever. Artwork: DC Comics

Although better known for his artistic abilities, Perez proved that he could also write, as his six-year run on the Wonder Woman title from 1987 to 1992 stands out as THE definitive series for the character.

Taking a cue from Greek mythology, Perez, along with Len Wein and Greg Potter, retconned Diana into an emissary and ambassador from Themyscira, effectively setting the standard for what Wonder Woman is today.

The Gal Gadot-starring movie is not the first live-action version of Wonder Woman, of course. The most famous version of the superheroine is the one played by Lynda Carter in the Wonder Woman TV series that ran from 1975 to 1979.

Patty Jenkins’ 2017 film was the character’s first live-action feature film. (Editor’s note: Gadot also appeared in Justice League later that year, and Jenkins later followed up with a sequel, Wonder Woman 1984, which was released in 2020.) 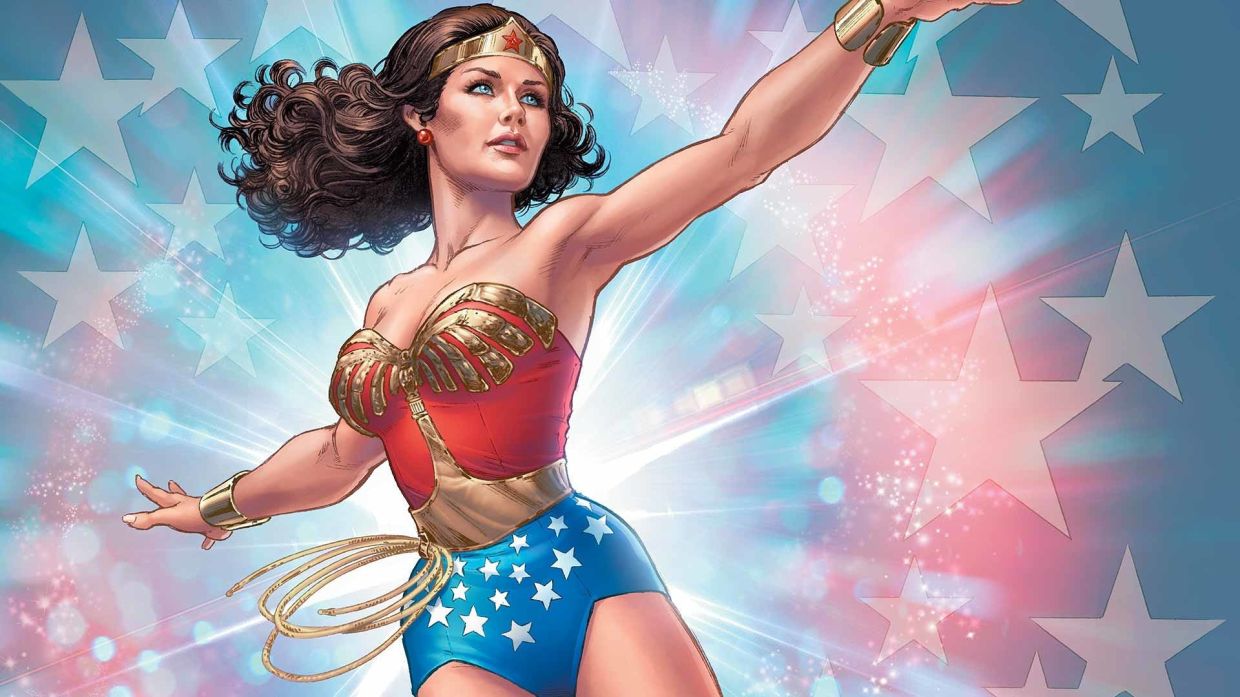 The cover for DC Comics’ ‘Wonder Woman ’77’, which is about the Wonder Woman from the 1970s TV show starring Lynda Carter.

Despite being arguably THE greatest female superhero of all-time, Wonder Woman has had her fair share of silly, and sometimes demeaning, stories. 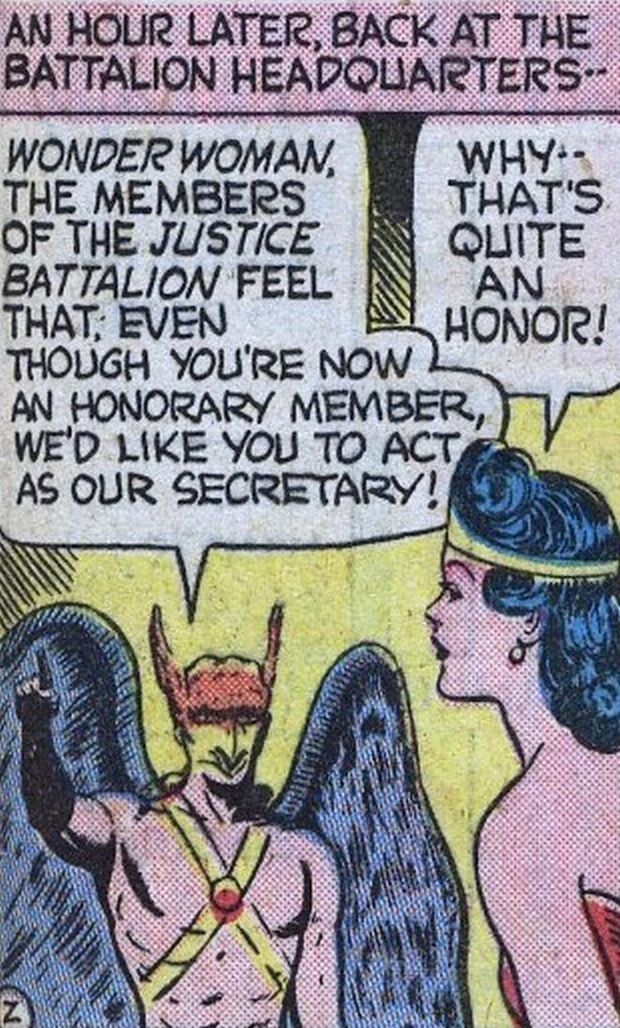 The most powerful woman in the world.. reduced to taking the minutes. Oh, the indignity! Wonder Woman artwork copyright: DC ComicsIn 1942, she was invited to join the Justice Society of America by chairman Hawkman… to be their secretary. Yeah, while the men went off to war, Wonder Woman was reduced to taking minutes at meetings.

Thankfully, she later became a founding member of the Justice League and played a major role in almost every single one of DC’s major events over the decades, with not a single typewriter to be seen.

Then, in the 1960s, there were stories about Wonder Woman as a teenager that delved into her love life.

The only problem was, there weren’t any human boys around for her to date on Paradise Island, so she had to settle for… Ronno the Mer-Boy and Wingo the Bird-Boy (don’t ask).

And that’s not even mentioning that whole “Wonder Woman opens a fashion boutique” thing.

Oh, speaking of jobs, there was the time in the 1990s when someone in DC thought it would be a great idea to give its most powerful and iconic female superhero a job… at a fast food joint called Taco Whiz. Gee whiz. Alec Baldwin doesn’t feel guilt over ‘Rust’ shooting: ‘If I felt I was responsible, I might have killed myself’