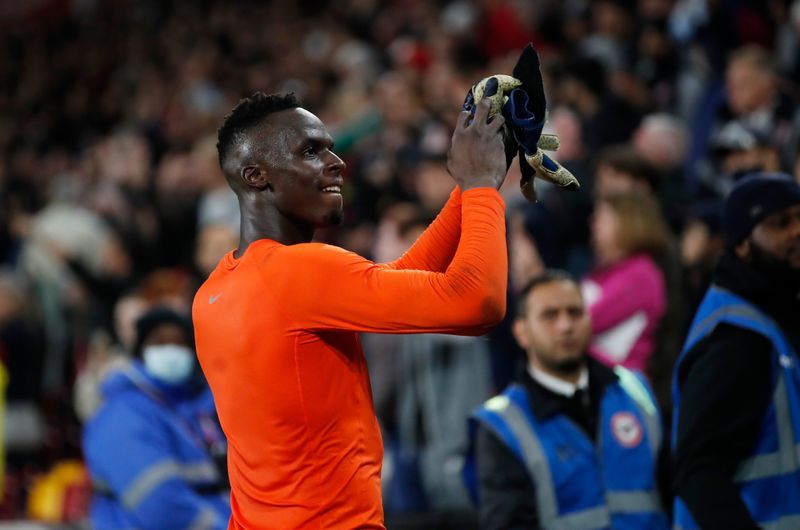 Chelsea kept their grip on the league’s top spot https://www.reuters.com/article/soccer-england-bre-che-report-idINL1N2RC0CO thanks to a Ben Chilwell strike, but they owed their three points as much to goalkeeper Mendy, who pulled off a string of saves to deny Brentford an equaliser.

Mendy denied Saman Ghoddos in the 83rd minute as he rushed off his line to close down the angle, and the Frenchman turned over an acrobatic overhead effort by Christian Norgaard in injury time.

“Ed was absolutely decisive to escape with a clean sheet,” Tuchel told reporters. “He was very strong and very concentrated in the build-up play. Very good performance and of course the last 20 minutes, the match turned into a cup game.

“They took a lot of risks and put a lot of bodies into our box. We could not keep them away from shooting and having the big chances.”

“I don’t know how many saves he made, but there were a lot of very important saves and he does it every week for us,” Chilwell told the Chelsea website https://www.chelseafc.com/en/news/2021/10/17/chilwell–edou-gives-us-confidence.

“He bails us out, whether it’s once or twice, or in this game on several occasions. He’s a world-class goalkeeper and is the one we’ve got to thank.”

(Reporting by Manasi Pathak in Bengaluru; Editing by William Mallard)

Share
Previous Actor Ryan Gosling takes on his first role as a brand ambassador
Next Czech car sector to make 250,000 fewer vehicles this year due to chip shortage