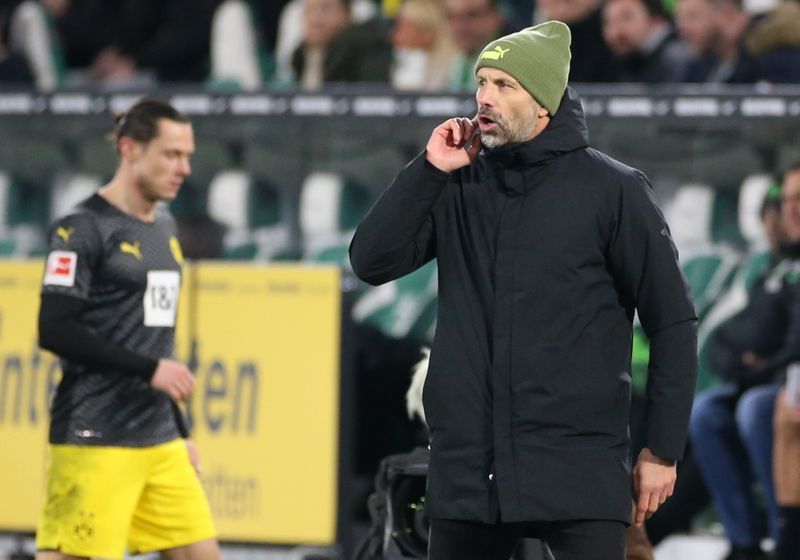 (Reuters) – Borussia Dortmund need to improve their performance to be able to pose a threat to leaders Bayern Munich in Bundesliga’s Der Klassiker next weekend, manager Marco Rose said after his team came from a goal down to beat VfL Wolfsburg 3-1 on Saturday.

Striker Erling Haaland scored on his comeback from a hip flexor muscle injury that had sidelined him since mid-October, and the victory moved Dortmund up to 30 points, one behind Bayern, whom they face on Dec. 4 at home.

Rose drew some encouragement from Dortmund’s bounce back against Wolfsburg, after the disappointment of being knocked out of the Champions League in midweek.

“Everyone’s looking forward to the Klassiker,” Rose said on Saturday. “Overall, we know that there are still things we want and need to keep working on.

“We need to get better if we actually want to be able to pose a real threat to Bayern. When they come to our stadium next week, then we obviously want to take the chance and be present.”

Haaland’s return was a huge boost for Dortmund and the Norwegian 21-year-old set two records on Saturday by becoming the youngest player to score 50 Bundesliga goals and reaching the landmark in the fewest games.

“Erling gives us a lot of energy when he’s on the field,” Rose said. “He’s a difference-maker that you cannot replace in the long run.”

(Reporting by Manasi Pathak in Bengaluru; Editing by Simon Cameron-Moore)

Share
Previous 通讯部与砂政府商讨，安排让候选人上官媒宣传
Next Is it healthy for kids to be vegetarians?