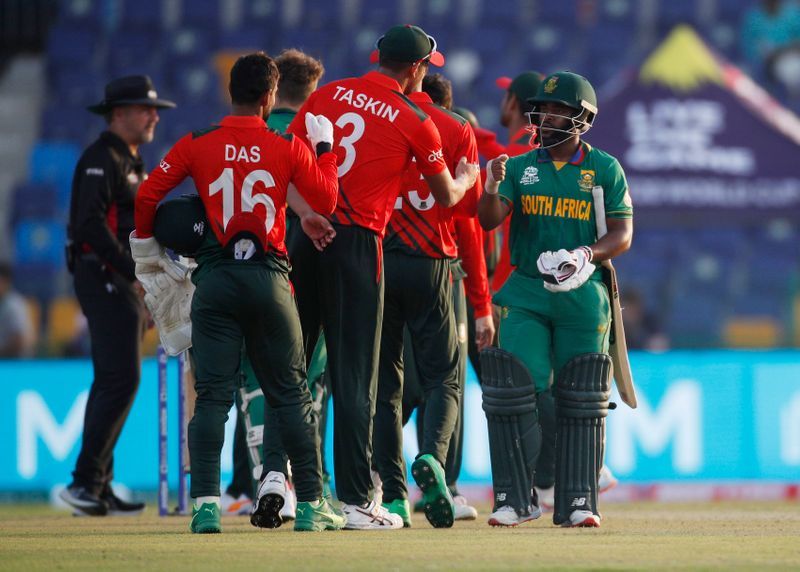 ABU DHABI (Reuters) – South Africa boosted their chances of reaching the Twenty20 World Cup semi-finals with a six-wicket rout of Bangladesh, who dropped out of the last-four race after their fourth consecutive defeat in the Super 12 stage on Tuesday.

South Africa suffered a mini-collapse but skipper Temba Bavuma made 31 not out to guide his team home with 39 balls to spare.

South Africa are second in Group I, ahead of Australia, after their third win in four matches and face table-toppers England in their final group match on Saturday.

“Quite a lot in the wicket early on,” Bavuma told reporters.

“Our fast bowlers KG (Rabada) and Nortje were able to exploit that, so good effort with the ball and clinical with the bat.

“We are blessed to have those type of guys running in with a new ball.”

The South African bowlers vindicated Bavuma’s decision to field against a Bangladesh side without all-rounder Shakib Al Hasan, who has been ruled out https://www.reuters.com/article/uk-cricket-t20worldcup-bgd-idUKKBN2HL0GU of the tournament with a hamstring injury.

Rabada rocked them early, dismissing Mohammad Naim and Soumya Sarkar off successive deliveries in the fourth over.

Although the bowler could not complete a hat-trick in his next over, Rabada dismissed Mushfiqur Rahim to leave Bangladesh in disarray.

Nortje bounced out rival captain Mahmudullah as Bangladesh crawled to 40-5 at the midway stage of their innings and Tabraiz Shamsi was yet to be pressed into service.

Leg-spinner Shamsi, the top-ranked T20 bowler, struck in his first over by dismissing Liton Das for 24 and Nortje returned to polish off the tail.

Bavuma combined with Rassie van der Dussen (22), however, to ease the South Africans to their target.

“Obviously frustrated,” Mahmudullah said. “We were very close to win two games. If we could have won those two games, it could have been a different story.”

(Reporting by Amlan Chakraborty in Dubai; editing by Ed Osmond)