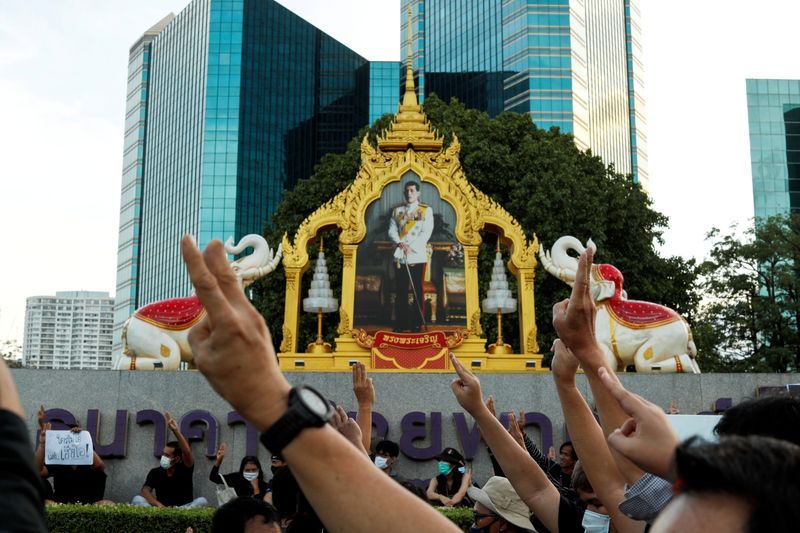 BANGKOK (Reuters) – Nine political parties in Thailand have taken a position on reform of a strict royal insults law in recent days, bringing into the mainstream a controversial debate that would have been unthinkable just a few years ago.

The catalyst for the discussion has been a youth-led anti-government protest movement that emerged late last year and openly called for a reform of the monarchy – a bold move in a country that traditionally upholds the king as semi-divine and above criticism.

Changing the lese majeste law, which carries punishments of up to 15 years in prison for each perceived insult of the monarchy, had been a subject off-limits for decades in Thailand, where the crown is officially above politics and constitutionally enshrined to be held in “revered worship”.

But the opposition Pheu Thai party ignited discussion on the taboo topic this week, with major parties weighing in quickly after it proposed a parliamentary review of how it said the law was being used to prosecute scores of opponents of the royalist government.

Since the student protests began last year, at least 155 people, including 12 minors, have been charged with lese majeste, according to a tally compiled by the Thai Lawyers for Human Rights group.

“The lese majeste law has become a fault line in Thai politics. It was inevitable,” said Thitinan Pongsudhirak, a political analyst at Chulalongkorn University.

“Moving forward, this will be the front-and-centre issue to decide Thailand’s political future.”

Major parties in the ruling coalition issued their own statements objecting to amending the law, including Prime Minister Prayuth Chan-ocha, a former army chief.

“It’s a security matter for our country,” he said. “We do not want to destroy something that is revered by Thai people.”

Prayuth’s government has denied misusing the law. The palace, which has a longstanding policy of not commenting on the issue, could not be reached for comment.

Thailand’s media has long self-censored on issues of the monarchy but in a rare move, Thursday’s Bangkok Post newspaper carried an infographic of the major parties’ positions on lese majeste, under the headline “to change or not to change”.

Opposition parties Move Forward and the Seri Ruam Thai have also accused the government of abusing the royal law to go after opponents, and they called for punishments to be less severe.

In February, 44 Move Forward lawmakers sought a reduction in the maximum sentence from 15 years to one year, or a 300,000 baht ($8,982) fine, or both. Their effort was shot down by parliament, which said it was unconstitutional.

Stirring the debate too was influential tycoon and self-exiled former premier Thaksin Shinawatra, Pheu Thai’s de facto founder. This week, Thaksin voiced his support for preserving a law that he himself has been accused of breaking, while calling for changes in how it was applied.

Political scientist Wanwichit Boonprong said a push for a review is unlikely to gain much traction in parliament, though it has forced other parties to take a firm position on one of the country’s most sensitive issues.

But Piyabutr Saengkanokkul, secretary-general of the student-led progressive movement, a backer of the Move Forward party, said opposition efforts were not bold enough, and it was time to abolish the law altogether.

“The party needs to be avant garde,” Piyabutr said on Twitter, adding Move Forward should be pressing a more progressive agenda.