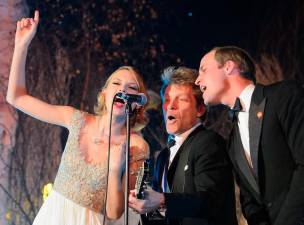 PRINCE WILLIAM recently opened up about singing with Taylor Swift on the stage of the Centrepoint charity event in 2013. During his time as a guest on Apple Fitness+’s Time to Walk series, the Duke of Cambridge revealed how it happened.

“I went to a charity fundraising gala for Centrepoint, which is a young homeless charity that I am very fond of and have supported for many years. It’s an annual fundraiser, and I turn up, and Jon Bon Jovi and Taylor Swift are at the event, which nearly knocked me off my feet, as well.”

The Prince continue to share that he was seated next to Swift. And after Bon Jovi’s performance of his first song, Swift persuaded him to join Bon Jovi on stage to perform his hit single, Livin’ On a Prayer.

“To this day, I still do not know what came over me. Honestly, even now I’m cringing at what happened next, and I don’t understand why I gave in.”

“But, frankly, if Taylor Swift looks you in the eye, touches your arm, and says, ‘Come with me’, I got up like a puppy and went, ‘Yeah, okay, that seems like a great idea. I’ll follow you,” he recalled.

But upon going on stage, William was so nervous that he sweated and felt “like a swan”.

“Now, a lot of people might think that I’m comfortable on stage. When I do speeches and things like that, I’ve done so many now, they’re not a problem. But I’ve not done singing.”

Fortunately, William was a sport and went along with it. The Prince then had a dig at himself.

“So, yeah, go on and have a laugh. And don’t go and watch the video of me singing. Or do go and watch it, but just laugh to yourself about how I was feeling.

Percy Jackson and the Olympians lands a series on Disney+

Spritz your dry skin away!

Pride of the nation

Feeding people from the heart

How do moles and birthmarks occur?