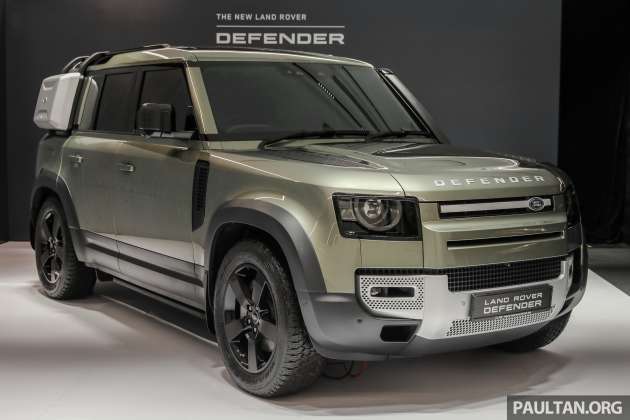 Two years after making its world debut in Frankfurt, the 2021 Land Rover Defender is now in Malaysia, with Jaguar Land Rover Malaysia (JLRM) officially taking the wraps off the fully-imported SUV at a launch event earlier this morning.

Despite earlier speculation that the L663 would be launched in both 90 three-door and 110 five-door bodystyles, only the 110 has been introduced at present, in both five-seat and seven-seat configurations. According to JLRM, the Defender 90 is coming, but will only be introduced sometime next year. Diesel powertrains for the car are also expected to come in then.

In its 110 form, the off-roader measures in at 5,018 mm long (including the tailgate-mounted spare wheel), 2,105 mm wide and 1,967 mm tall, with a wheelbase of 3,022 mm. Underpinned by the automaker’s D7x all-aluminium monocoque platform, the car is available in two petrol engines guises for the Malaysian market. 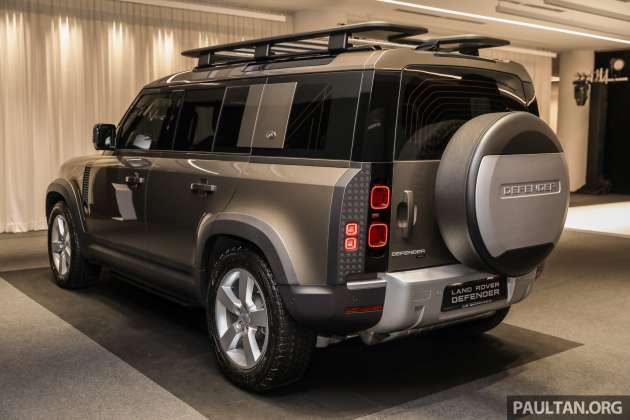 The other mill is a P400 3.0 litre Ingenium inline-six engine offering 400 PS at 5,500 rpm and 550 Nm of torque from 2,000 rpm to 5,000 rpm. The latter is badged as a MHEV, with the mild hybrid system on it incorporating a 48-volt electric supercharger, a belt-integrated starter motor and a 48-volt lithium-ion battery to store captured energy.

Performance specs include a 0-100 km/h time of 6.1 seconds and a similar 191 km/h top speed. Both mills are paired with a ZF eight-speed automatic gearbox, with a two-speed transfer case sending drive to all four wheels.

Kit includes electronic air suspension with Adaptive Dynamics, which can raise the vehicle by 75 mm in off-road mode, along with an additional 70 mm of lift for a total of 145 mm when required. 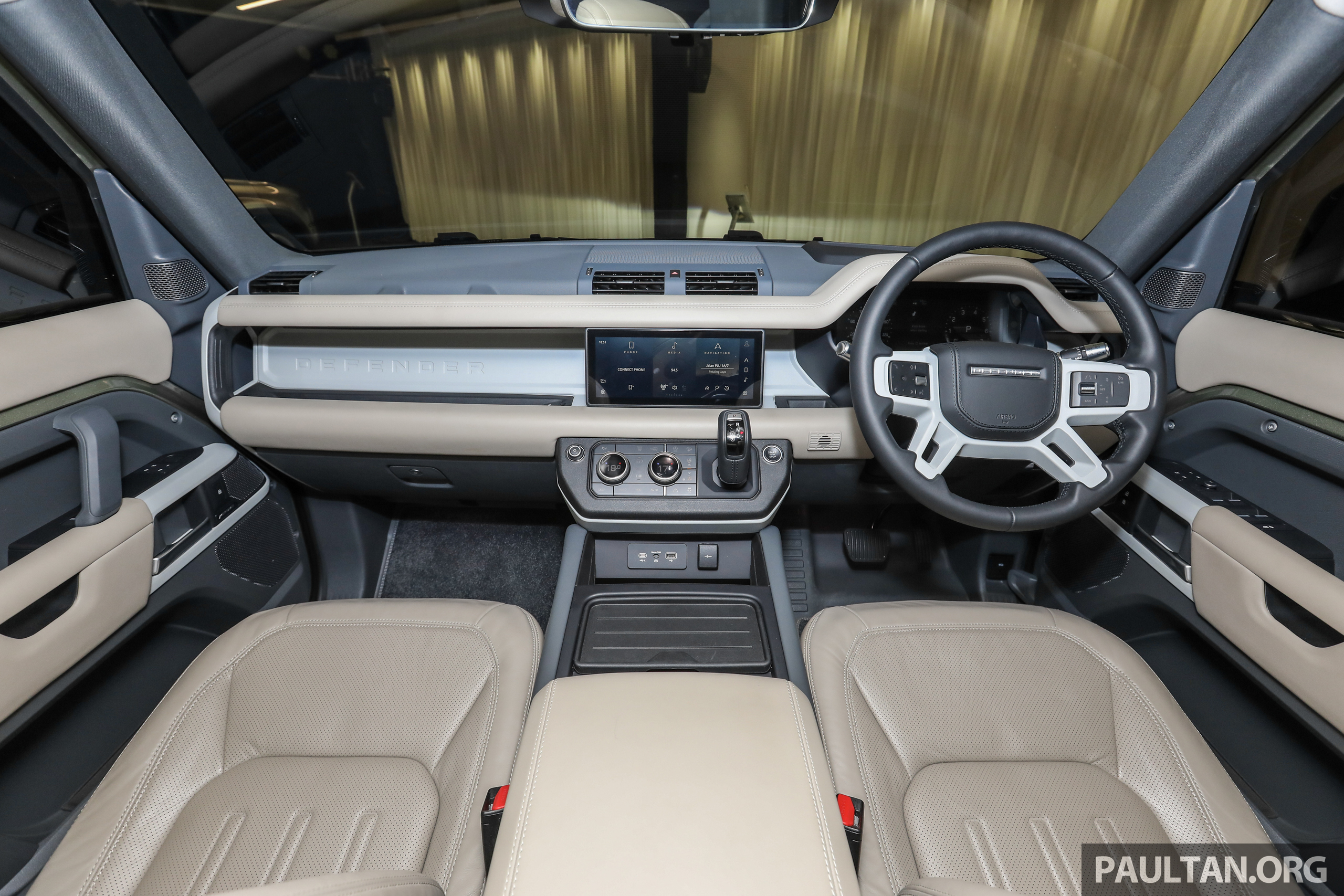 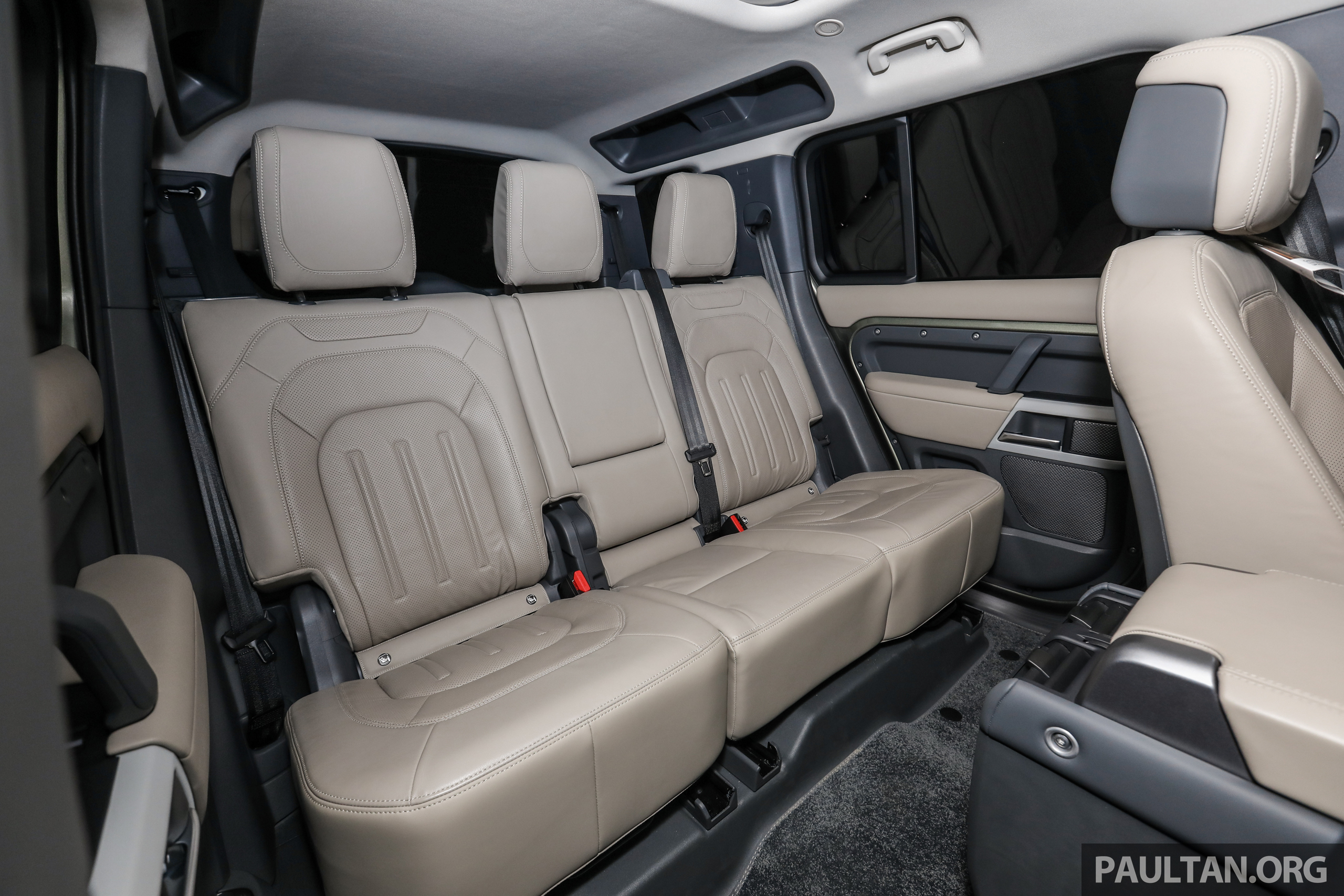 The car’s Terrain Response 2 also adds on a Wade mode to make it six (the others are Normal, Mud and Ruts, Grass/Gravel/Snow, Sand and Rock Crawl), making it the first Land Rover to incorporate Wade within the Terrain Response menu. Wading depth for the car is 900 mm.

Globally, five trim levels (base, S, SE, HSE and X) are available for the Defender, but JLRM is only bringing in the HSE for both 2.0L and 3.0L versions. As standard, the local spec cars are equipped with Matix LED headlights with signature DRLs, a 10-inch Pivi Pro touchscreen paired with a Meridian surround sound system. There’s also Apple CarPlay and Android Auto mobile device integration, and the onboard Bluetooth system enables two smartphones to be connected at the same time.

Also to be found is a 3D surround camera coupled with new 3D exterior perspectives alongside a 360-degree overhead view, while a ClearSight interior rear-view mirror allows unobstructed view of the rear, even with passengers or if the cargo area is fully loaded – the system uses a rear-mounted camera to display a wide angle view of the rear. Additionally, there’s also ClearSight Ground View, which shows video feed from the front underside of the car, useful when off-roading, and a head-up display.

As for pricing, that for the Land Rover Defender 110 2.0L starts from RM798,800, while the 3.0L MHEV is priced from RM988,800. There is no shortage of customisation options for the vehicle, with 170 individual accessories to pick from.

All Land Rover vehicles from the official channel come with the Land Rover Care programme, which includes a five-year warranty, five years of free service and three years of roadside assistance.