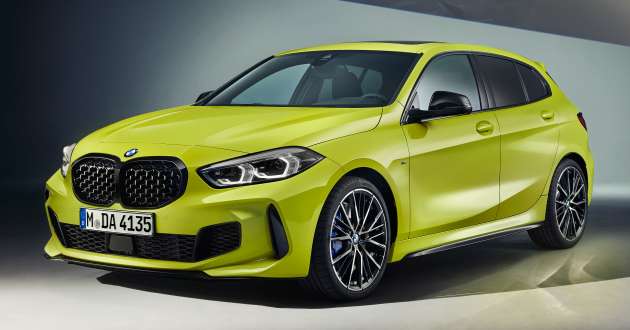 BMW has given the M135i xDrive a few updates for the 2022 model year, although this isn’t a complete facelift (or Life Cycle Impulse if you want to sound like them). Instead, the hot hatch receives upgraded suspension, an improved interior sound generator and a paint finish.

Starting with the mechanical tweaks, the M135i now comes with increased camber for the front wheels to better deal with lateral forces when cornering. There’s also a new hydromount to attach the front suspension wishbones, while the mounts for the trailing and control arms at the rear axle have also been redesigned.

BMW also recalibrated the spring and damping systems to match, resulting in a significant improvement in roll behaviour in corners. This provides a further beneficial effect on steering feel when the “car’s sporting abilities are put to the test,” it added.

Beyond these revisions, the rest of the powertrain remains unchanged, with a 2.0 litre turbocharged four-cylinder engine churning out 306 PS (302 hp) and 450 Nm of torque. This is sent to all four wheels via an all-wheel drive system as well as an eight-speed Steptronic Sport automatic transmission with a built-in mechanical limited-slip differential at the front axle.

You’ll get to hear the engine thanks to the twin-tailpipe exhaust system, but if you want even more acoustics, BMW has readied a revised soundtrack for the interior sound generator. Piped into the cabin through the sound system’s speakers, this “conveys the signature four-cylinder engine note of a BMW M model to those on board more authentically than ever.”

As the 1 Series range is now supported by BMW Individual, the M135i can now be ordered with special paints, including this Sao Paulo Yellow hue, with Frozen Pure Grey and Frozen Orange also available.

Khairy: SOP for S’wak polls to be finalised by Nov 30

Bangladeshi student escapes the gallows for trafficking 3.8kg of ganja