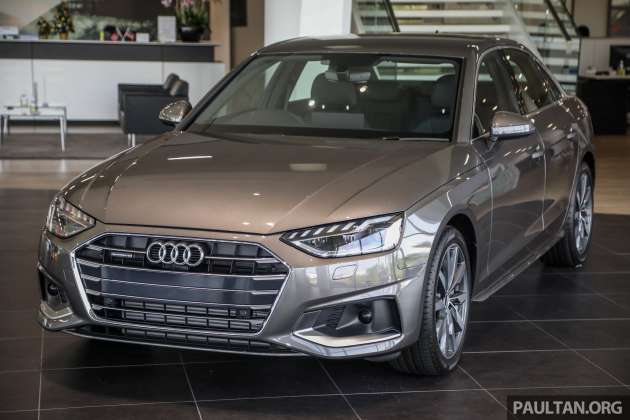 Of the many cars that have gone on sale in Malaysia last year, it’s the Audis that have largely flown under the radar. Here we have the 2022 Audi A4 facelift in the sole advanced 2.0 TFSI quattro guise, currently on display at Audi Setia Alam by Rimau International.

The fully imported sedan is priced at RM358,900, and included in the price is a five-year unlimited mileage warranty. Note that the price isn’t inclusive of the sales tax exemption (now extended until June 30, 2022), so expect a slight price reduction when you sign on the dotted line.

Performance-wise, a 2.0 litre longitudinally-mounted four-cylinder TFSI engine powers the car, generating a healthy 249 PS at 5,000 to 6,000 rpm and 380 Nm of torque that peaks from 1,600 to 4,500 rpm. A seven-speed S tronic dual-clutch gearbox sends drive to all four wheels (quattro), enabling a century sprint time of 5.8 seconds. The combined fuel consumption is 7.1 litres per 100 km.

Key specifications include full LED headlights and tail lights, the latter complete with dynamic turn indicators. The side mirrors have heating and auto-dimming functions as standard, while the car rides on 18-inch graphite grey 10-spoke diamond-turned wheels (245/40 Hankook Ventus S1 evo tyres). Ride should be decent with the comfort suspension, though this model comes with damper control as standard.

Inside is an all-black affair, while silver aluminium decorative inserts on the dash and console provide a slight ambient contrast. Audi virtual cockpit plus (12.3-inch fully digital display) is standard, as is the freestanding MMI navigation plus touchscreen display. There’s no branded sound system here, unfortunately.

There isn’t much in the way of advanced driving aids as well. It only has passive cruise control with speed limiter, Audi parking aid plus with 360-degree surround view camera, six airbags, and Isofix child seat anchors for the front seat and two outer rear seats. This puts the A4 leagues behind its key rivals (BMW 320i, Mercedes C 200), all of which come with at least autonomous emergency braking as standard.

Football: Soccer-Milan won’t sign players for the sake of it – Pioli