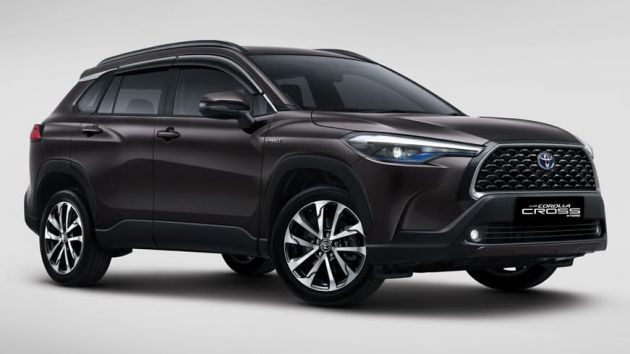 By now, it’s not much of a secret that UMW Toyota Motor (UMWT) plans to launch the Corolla Cross Hybrid in Malaysia. Even so, the company is still continuing its slow tease of the upcoming model, which will apparently be “coming soon.”

The latest teaser posted earlier today gives us a good look at one of the Corolla Cross Hybrid’s headlamps, which features a blue accent line at the base of the cluster – a distinctive cue of the hybrid model. Beyond that, there’s no mention of an official launch date, although you can register your interest here if you want to be kept updated.

As a recap, the Corolla Cross Hybrid’s powertrain is made up of a 2ZR-FXE 1.8 litre Atkinson-cycle four-cylinder petrol engine (98 PS and 142 Nm) and an electric motor (72 PS and 163 Nm) for a total system output of 122 PS. Drive is sent to the front wheels via an e-CVT, while the electric motor draws power from a 6.5-Ah nickel-metal hydride battery.

The non-hybrid Corolla Cross was first launched in Malaysia earlier in March and features a 2ZR-FE 1.8 litre naturally aspirated four-cylinder petrol engine developing 139 PS and 172 Nm that is paired with a CVT.

The Corolla Cross Hybrid has already gone on sale in Thailand, Indonesia, the Philippines and Vietnam, and it shouldn’t be too long before we welcome it. The hybrid SUV is one of a few locally-assembled (CKD) hybrid models that UMWT has planned, with the Corolla and Camry being the other possible cars that could gain hybrid variant.

We’ll have to wait until launch day to find out how you’ll have to pay for a Corolla Cross Hybrid, but for some context, the current, fully-imported (CBU), non-hybrid Corolla Cross starts at RM124,000 for the base 1.8G, moving up to RM129,266 for the top-spec 1.8V. These prices are inclusive of the ongoing sales tax exemption that runs until the end of 2021, which is 50% as they are CBU cars from Thailand.

The introduction of the Corolla Cross Hybrid as a CKD model, when it happens, will likely also result in the non-hybrid variants be assembled in Malaysia, which could bring down their prices. When the Corolla Cross was launched, it was mentioned that beginning from the second half of the year, the model will be locally assembled at UMWT’s Bukit Raja plant. This hasn’t happened yet, as the Corolla Cross’ CBU pricing is still listed on Toyota Malaysia’s official website.